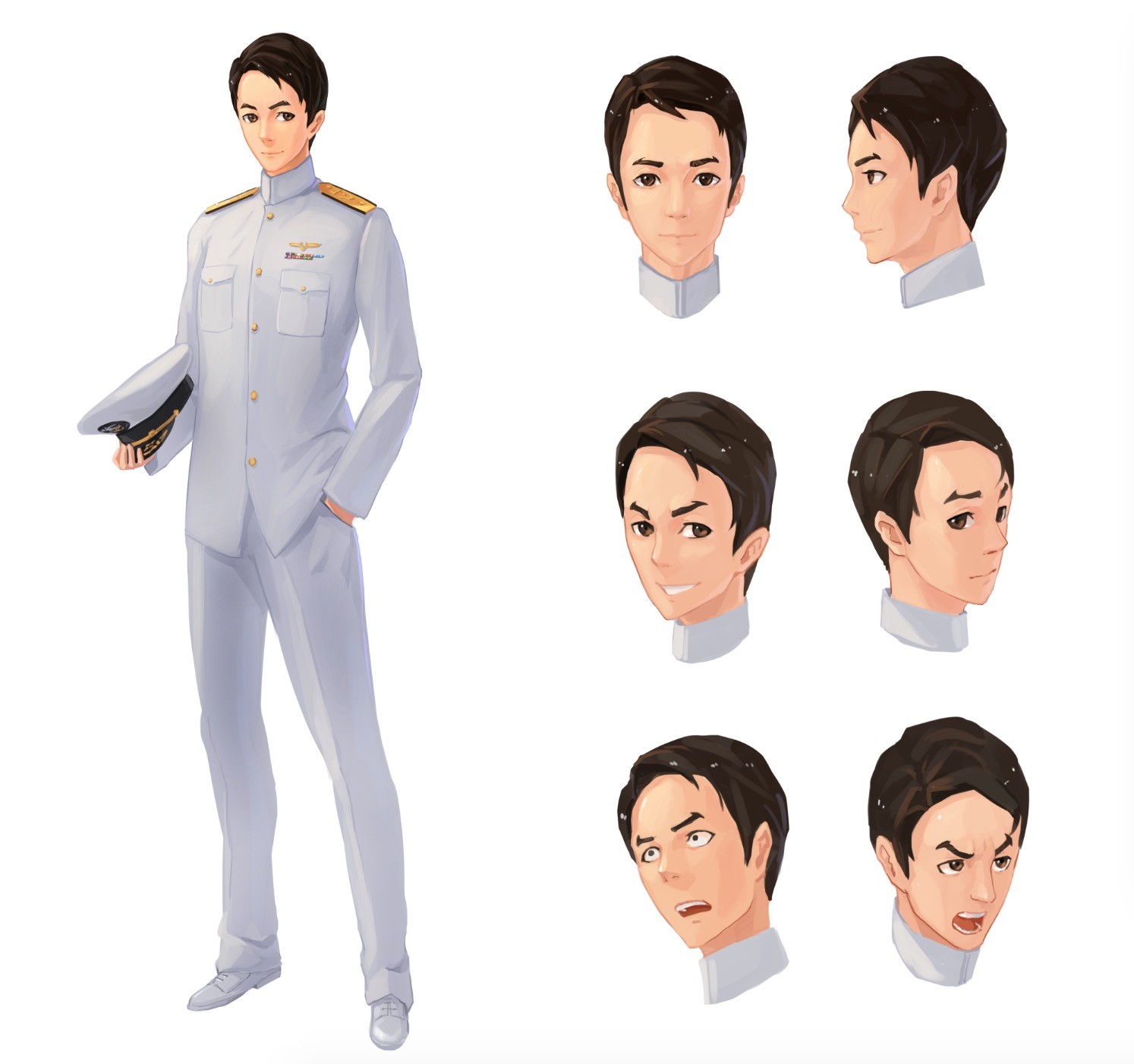 Across the ocean, inside the Special Task and Evaluation Command’s mobile island base Avalon, a US naval officer stood before an array of screens, databases, and holographic images. Here and there, a tiny spark of light can be briefly seen as little fairies – enigmatic allies of humanity – coalescence in and out of sight.

“No time, Leon. This was pretty sudden. We’ll reconvene in Shanghai instead. Did you see this yet?”

Like the Combat Information Center on a warship, Avalon‘s primary purpose is to direct and command as necessary in both peace and wartime. Much of its design goals take this into consideration, and the resultant communication interface – slim, lean, efficient – would seem like something out of fiction to the casual bystander.

Mike waved his hand. As if reading his thoughts, a nearby screen lit up, and an enlarged image of a scanned letter appeared on screen. A moment later, a second image – what appears to be an annotated translation of the document – appeared as an overlay.

“You were asking about our host, right? Well, turns out Commander Ma’s nephew just joined the PLAN.”

“I think it gives us a pretty big hint as to why State’s sending us rather than the usual diplomats over.”

May our great Chairman, whose light illuminates like that great red sun in heaven, be ever in good health! May his vigor be endless, and may his infinite, limitless wisdom be ever-present as we all tirelessly labor for the good of the people.

It is only through endless revolution and introspection do we now know the values of hard work, the steadfastness of our party, and the care in which our great chairman pay to all the people of China. As a mentor of the downtrodden people, and your teacher in the ways of classless struggles, I hereby bequeath you this letter as a final reminder of the joys of all the tribulations that we have overcome. I hope that as you leave the People’s Daoguan in high spirits and become a pillar in service to your country, that you will bear in mind all that you have learned. Never forget that you serve the people, and that the revolution is still on-going. I am sure that your uncle, who is a clear-headed and passionate revolutionary like all of us, will be a better mentor than I as you enter the glorious people’s workforce. May you find your path in our great journey together, as all of China labors towards a greater and brighter future!

A humble Teacher of the Revolution, Guardian of culture, and Servant to the Proletariat

The marine rubbed his head and thoughtfully paused for a second. He made a face.

“My head hurts from reading that. But yeah, I see what you’re getting at. I thought something’s up when I was thumbing through our intel on their latest batch of recruits. There’s gotta be a reason and it’s not the CCP having a sudden change of heart and decided to embrace Taoism en masse.”

Mike nodded. He waved a second time and a number of portraits appeared on a second screen. With another gesture, the portraits arranged themselves into a neat web, and thin, translucent lines connected one face to another with captions like “Brother,” “Son of investment partner,” or “Former commanding officer, 1985-1988.”

Sure enough, there was a thin line connecting Peiying to Commander Ma Yunde. Leon pointed at the annotation that read: “Nephew.”

Leon pointed at another link that linked Peiying with a portrait that simply had a “?” in place of a face. Mike shrugged.

“That’s Peiying’s master. Remember that he was sent to a Taoist temple – the ones that haven’t been closed down, anyways. His parents wanted him to get a decent education, and that was the best place to get one given the turmoil that the country was going through.”

“That’s it. We don’t have much on him. We just know that he’s an old Taoist monk who enjoys wandering around China. Nobody knows quite what he looks like, but this picture -”

Mike pointed as a half-transparent image floated onto the “?” on the web that they’re studying. The image was grainy and poor quality, and the colors seemed to have faded with age. The picture showed what appeared to be a collapsed building in the middle of a busy city intersection. From the haphazard postures of some of the people, some of the injuries looked quite serious.

“- makes me think that he looks every inch the stereotypical old master. Yes, the movie stereotype.”

Highlighted in the picture, hidden away in a corner, was a frail-looking old man with bushy eyebrows and a long, pointed beard. He was effortlessly carrying a grown man on his shoulders, and he seemed to be grinning at someone or something.

“This photo was in the People’s Daily, and he was referenced as one of the “heroic bystanders” who assisted in the first-aid process. That’s the only photographic evidence we’ve got of him. You ask the locals and he’s something closer to a folk hero. Magic healing powers. Leaping over buildings. Super strength. Whispers of being immortal. You get the idea.”

Leon rubbed his chin as he pointed at another newspaper clipping. It’s all making sense now.

“So lemme think about this out-loud for a bit. If I was PLAN brass and trying to figure out the island thing, and I know from us that it’s probably magic, until I know it’s not-magic magic’s fair game, right?”

“So I go looking for a few magic men. I don’t know how you’d start, Mike, but if I was running the show, I’d be listening real hard at the word out on the street. I dunno what the equivalent is, but I’d guess that if this is back home we’d be looking out for rumors of faith-healing, curing of the blind, laying of hands, that kinda stuff…”

Leon tapped his hand deliberately, continuing at a brisk pace as he ticked off the examples he mentioned one by ones. He’s seen first-hand the strength of some of these small, closely knit communities, and in a world with shipgirls and fairies and giant sea monsters? The idea that there might be greater powers at work isn’t that far-fetched.

“So obviously, this guy would be high on their shortlist. I’m guessing they recruited folks like Peiying when they realized that the old guy’s nowhere to be found, heh. That sound about right?”

“Astute as always. I’m also thinking along similar lines, but there are a few holes in it that I guess we’ll just have to find out when we arrive. For one thing, this is a matter of national, if not global importance. I find it hard to believe that someone with a reputation of being a “folk hero” would just sit idly and ignore the matter at hand.”

“Maybe he’s a sham. I’d be hightailing it outta there too. If I weren’t legit? I can coast easy on my reputation as a magical old man who, I dunno, has to go meditate underneath waterfalls or something like that.”

“Yes, but how would he know? The Chinese are nothing if not good at keeping secrets. How would he know that the PLAN is recruiting individuals with special experiences if his monastery is in the middle of nowhere? I mean they just got a phone installed in the town nearby two months ago.”

Leon gave a comically huge shrug as he chuckled.

“Hey, maybe the guy really is magic, so he just knew. Why does it matter?”

“He’s a curiosity and an unknown factor. I just have a nagging feeling that it’s more than a curiosity, though. Something about this whole thing is too improbable. Peiying, for instance, wasn’t even formally enrolled in the temple. He’s certainly intelligent, but he was basically a less of a full disciple and more along the lines of a lay affiliate or a cook.”

Mike made a scrolling gesture as he brought up a datafile on assorted Chinese recruits sent on the mission at hand.

“And he scored pretty well on the aptitude exams the PLAN uses to select their officer candidates. Not stellar like some of the other ones sent on the trip, here, for instance, but I’d say that he’s the anomaly rather than the norm. All the rest of these guys are a few standard deviations above the mean…”

“Whether it’s political acumen, familial wealth, or other soft parameters, you can see he’s easily one of the least advantageous candidates to push forward. The only connection of note is his uncle’s extraordinarily long service, and even so, his uncle is just a field officer with a checked background at best and undesirable history at worst. Admiral Qu’s not known to be a nepotistic man, either, and he’s got a legacy to consider given his advanced age. So what exactly is going on here?”

“I dunno. Guess we’ll find out in a day? I mean it’s not like you or I were anything terribly exceptional either, heh. STEC’s got one genius and it’s not us, that’s for sure. ”

“Yup. Until then, us non-geniuses just have to work a little harder to figure it out.”