Curator’s note: The contents of the message makes it rather abundantly clear that this is right before Admiral Yin’s promotion. Tch, sometimes I wonder if all this classification/NDA is a bit pointless. 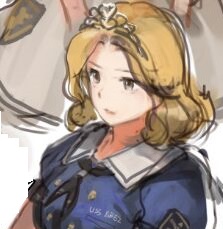 Note from New Jersey: This letter and others are part of a rotating display of my correspondences with shipgirls, admirals, and other persons of interest prior to, during, and after the Abyssal War. I voluntarily donated these to STEC Archives after obtaining permission from the involved parties. The contents are unaltered, so expect spelling errors and the occasional splotch of coffee.

Congratulations on your promotion and I hope you aren’t feeling nervous. Commander of Avalon base places you at the head of our operations and I can’t think of a finer man to take the reins.

I’ve known you long enough to know that you’re probably thinking that you’re not qualified for the job, or that you’re having second thoughts. I know it’s necessary to put on a brave mask for everyone’s sake, but I want to reassure you that I believe in you. For all the criticisms we like to throw at the top brass sometimes, they wouldn’t have promoted you if they didn’t believe you could do it. They believe in you. All of the girls believe in you.

I believe in you. There, I said it a second time just for emphasis.

But, I figure now is the time to tell you a little about my experiences. Some of these are personally applicable, based on my own experiences. Others are based on the work we now carry out. I will not have you repeat the same mistakes.

The Abyssals are crafty and will not stop until either we or they are well and truly beaten. Second, third, follow-up waves have quickly turned early victories into unsalvageable defeat. Should we manage to fight off the first attack, humanity’s greatest enemy is in fact, apathy. I have no idea how an existential crisis on the level of the abyssals can be de-prioritized or outright dismissed, but it happens more frequently than you’d think. Domestic bickering results in stagnation, decay, and ultimately a hollowed-out defense line incapable of its proper function. International efforts fall apart and the Abyssals pick nations off one by one. Miraculous weapons of war trained on each other instead of the Abyssals. Hopelessness and despair resulting in humanity simply giving up.

We’ve gamed these scenarios out and studied them extensively, so I’m not telling you anything you don’t know already – just reminding you of the solutions you’ve applied and the fact that we’ve avoided a few of these outcomes already. I have full confidence in your ability to lead and more importantly, I believe we’ll be able to defeat them once and for all.

You lead from the front. You try to take care of things as soon as they present themselves. You listen and accommodate, bend and weave when permissible, steadfast and unchanging when necessary. That’s what makes you the right man for the job.

But you are also the kind of man who would never turn down a cry for help. You’d burn the midnight oil to get everything done, for anyone who asks, at any time. I watch you go about your business and occasionally muse about how in the world did two workaholics end up being in charge of humanity’s final line of defense against interdimensional aliens. Even God took the seventh day off – perhaps you might take some inspiration from there.

I’m terrified that some day you’ll burn yourself out, and I confess I have no idea what I can do to prevent that from happening. So I leave it to you, with my hope that you’ll persevere. If there is anything I can do to help carry your burden, just give the word. I promise that I’ll stand alongside you until the end of the line.

P.S. Narwhal chilled a bottle of wine in your fridge. Shall we enjoy it together, just the three of us?