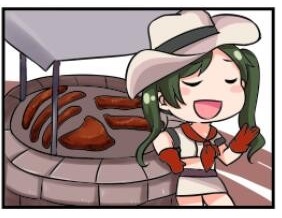 First things first! No Texas accent for this one. You know why?

This is definitely not English. Haw, I’m Texan and even I can’t read that. It kinda does sound like something I’d say though…

Thanksgiving. Feels kinda odd to hand this off to me, since I was more expecting oh, I dunno, any of the girls that actually cook stuff that’s more appropriate to Thanksgiving. You know, turkey, stuffing, gravy, cranberry sauce, that kinda stuff.

I know two major cooking methods. Both generally involve cooking small animals or larger animals cut into smaller szies. Actually, since both of them involve putting things over some sort of fire, I guess it’s really one method. It was really difficult in the old days (I don’t wanna get anyone in trouble), but you can see what it was like then, and think about what it’s like now.

Anyways! What I wanted to talk to you guys about are stuff to be thankful for. Life might suck sometimes. But first, y’all alive! That’s definitely something to be thankful for. Yeah, yeah. I know it’s a really low bar and all, but we’ve got a start, right?

Hey. Listen. I know it’s not helping if you’re hurting right now. I also know that it sometimes can be hard to feel like you can ever dig yourself out of the pits you sometimes find yourself in. Sometimes life’s a bit lonely. Maybe you feel isolated. Maybe you don’t got people to talk to. Maybe you had a bad fight with ma or da and you don’t feel like going back home.

Bad stuff happens. Sometimes, the bad stuff’s outta your control. But you know what there is something you could do?

How you deal with it. Ol’ Missy talked about it last time, too. My take? The world’s got enough things gunning for ya. You really don’t need to stick yourself into that mix. Now, she knows she can click with the people that works really well with that guilt mentality. People aren’t all running on guilt, though, and someone who’s already feeling bad about what they’re doing badly won’t – won’t just get better on their own.

So, I always tell them, look at what you’ve got. Don’t let how much stuff other people got or don’t bother ya. They aren’t you! You’re you.

Lemme tell ya a little story. I was visiting the hospital one time right around now. Volunteer work. Part of what I do. We shipgirls don’t have familial obligations so some of us tend to spend the holiday season helping people. Sometimes that means spending time with those less fortunate.

There’s a little girl I know. She’s pretty sick. Probably won’t make it to Christmas. So, here I was, a turkey dinner plate in hand, wondering, just what should I say to her, huh?

I didn’t have to do any ice-breaking. She did. She asked me what am I thankful for. I just balked. Haw, what should I say that won’t make her feel bad?

“Well,” she said. “You know, I’m thankful that sometimes, it stops hurting for a while.”

Here I was, the grown-up, thinking about how to say stuff.

“When it hurts again, I know that at some point, it’s gonna stop. So, I’m thankful for that too.”

Some grown-up I ended up being, huh.

The above anecdote was a personal one that I felt like it was appropriate to share, particularly considering my own circumstances. It’s no secret that I’ve gone through some fairly intense medical treatment, and it’s no secret that I’m still recovering (though, as you can probably guess, I’m feeling better!), but that episode was something that changed my outlook considerably.

We played Uno and had a light chat before my time was over. She told me she wanted to learn how to do ballet. Asked me why I seem so angry all the time. I told her I planned to attend medical school. She brightened and asked me if this means I’ll save people some day.

“I’d like to do it too, but I guess I’ll wait until I get older. Morgane you probably don’t need to get too much older to do that though, right?”

This was sophomore year in college. To this day whenever I think back at what happened, I feel a small tinge of regret that I didn’t tell her, yes, I definitely will try. I never did get another chance.

Thanksgiving is around the corner. For most of us, we get to spend it with family and friends. Treasure it. Savor the moment. Let us be thankful together.