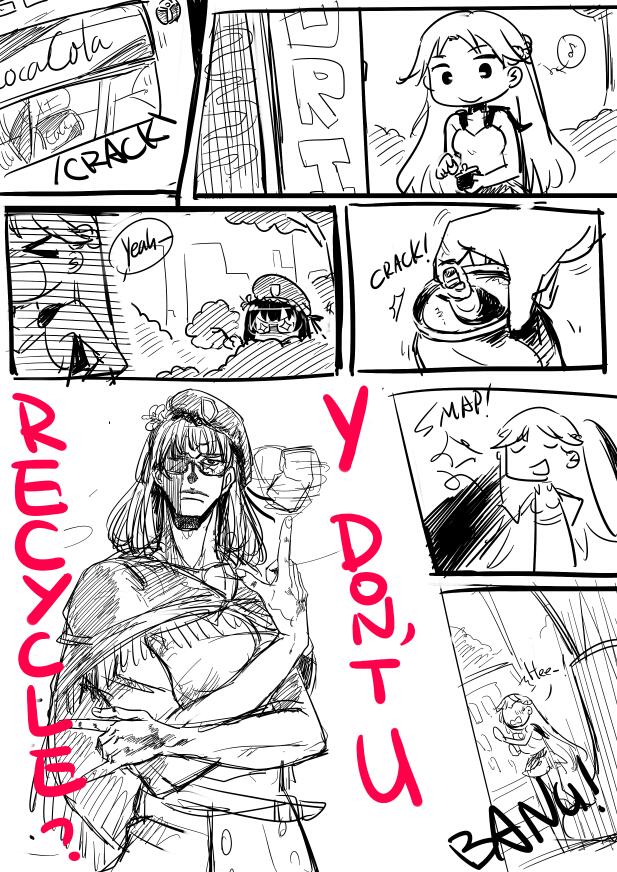 We sometimes do some very, very, very, odd things with our characters. The canonicity of this is well, let’s put it this way.

When Morgane is busy in real life she doesn’t work on like, the history or the lore page. She digs out weird stuff (like these) and write on these instead.

This is actually in-character for Sanny and 100% believable. She cares about the environment quite a bit, and what’s more, she does her part to make sure the environment is clean and sustainable for the next generation.

Remember, this is how she sees herself. 😛 It’s also how we see her.

To someone who might not care so much about things that she cares about, though, yeah, in that moment, she probably does look like a JOJO character.

Why is Sanny designed in this way?

There’s a lot of that went into her design. The city of San Francisco has a reputation for being progressive and liberal even before today’s time. We’re talking about at least since the time of the Californian gold rush. Given such a strong connection to certain themes, it’s obvious what her personality, political orientation, ideals, and such would be.

What kind of a liberal do we make her, then? I mean, not every single person who lean or is left are out of the same mold, right?

Here’s where the ship’s history comes in. First-hand veteran accounts says she’s a fighter. That’s pretty par for the course in terms of the research that I’ve came across. Shipgirls are inspired by their warships, and I don’t think I’ve interacted with a single vet who proudly proclaimed that their ship wasn’t tough, or wasn’t a fighter, or that they didn’t do their best.

(Well, okay, so my great uncle miiiiiiiiiiiiight have something to say about some of that, but he’s an irate old pirate so that doesn’t really count. :P)

Where do I look for inspiration next? I turn to crew records. If there’s something particularly striking (again, Essex, Lexington, these are good examples of … unusual instances of their crew behaviors that ultimately made it into their shipgirl personalities) I make a note of it and see if it works to fit it in. In Sanny’s case, the crew is spirited and almost too eager to get into the fight. Very much in your face, let’s get up and get ’em type of personality that isn’t found on the crew of every other heavy cruiser.

Okay, so by now I’m beginning to get a feel for how we want to write her personality. Cool. Let me go look for more. I happened to find a few other things. Some remarks on the personality and nature and more importantly, command style of Callaghan. (Fans of history and readers of this site really shouldn’t be surprised by that name, right?) Recollections of discussions of battle planning with Norman Scott. Crew’s recollection of Captain Young.

I noticed something. Consistently, once these men put their minds to something, they will make it happen no matter what. Her tagline? That’s a real quote from history. Part of our inspiration for Sanny’s personality comes from that, and it explains why she’s not a flower-power-peace-child-hippie type (though she definitely does dress the part).

I should note, too, that we intentionally create our shipgirls with significant attention to how their personality would work in our world, but more importantly, of the themes at large. I really can’t think of a single character we’ve done whose personality is a direct transplant of their namesakes or historical counterparts or famous people. That’s just … if I can put it rudely, a bit lazy? It’s why Sanny isn’t devotely religious (all of those men up there were), nor does she prefer her coffee black (okay this is somewhat in character for a Californian girl – sorry, my East Coast snobbishness is leaking on the page here), nor is she particularly keen on keeping her bed in tip-top shape (this is apparently something the ship had random, beyond the normal level of inspection, types of spot checks based on recollections).

Why? Well, the first really doesn’t quite mesh with her personality. Sanny would say that she’s pretty spiritual, but she’s definitely not the type to be attending church like a lot of the other girls. The second is just a character quirk that goes with the rest of her dietary preferences. You know, she’d probably be into things like superfoods, quinoa, avocado toast, locally-grown-organic-free-range, that kinda stuff. The last is a trait that’s got the same reason as the first. If she was a crew member in actual history, she probably wouldn’t get in trouble for poor discipline, but she wouldn’t like the frequency or the sudden spot-checking that was common at the time.

Can you write a Sanny with all of those traits? Sure. I think it could be done well if someone gave some serious efforts into why they chose to do it. But this is how we chose to do things here. 😛

PS. Someone like her is also a fairly good way to introduce to our Asian readers (particularly the Chinese, who by definitely are all “leftist” since y’know, communism with Chinese characteristics 😉 about the status of the left and their contributions to American history.

This does mean that neither her nor Pennsy really gets to “grow” in terms of their political characterization. These two characters remain my personal favorites to use as props or talking heads whenever I need to artificially introduce a left-right dichotomy in or out of universe. So there really isn’t much reason for Pennsy to say, suddenly start voting straight D or the other way around. Nor is there necessarily any reason for the two to reach compromise on most issues – again, it’s convenient for me to highlight to you, the readers, the ideological differences, and in-universe the two can work with group consensus even if they personally disagree. Believe it or not, people who differ wildly from each other can be very good friends too. The late Justice Scalia and Justice Ginburg’s friendship is a pretty good example of that as a real-life example. 😛

(We do have an ending where the two causes immense amounts of trouble for each other in Congress post the Abyssal War since both goes into politics (Pacific’s timeline might actually succeed in pushing through term limits, don’t worry too much about the ol’ USA), though. :P)

In 2018 I’d say that the political orientation of the team really hasn’t shifted all that much. Zero is still an ardent leftist (true communist). Sune is still pretty much the de-facto rightwing (ultra)nationalist (she likes the ultra modifier, so, *shrug). Folks like Draa or St. Bernard or even November remain as apolitical or disinterested as ever (typical of our western democracies). I’m still a fairly run-of-the-mill traditionalist, K9 is still a fairly run-of-the-mill Roosevelt Democrat, Sima and Ethan and the Chinese folks are still pretty much pro-China Chinese.

So, in a world that’s a lot more politically stable than our own, I don’t think it’s unreasonable to say that not many changes happened to the two either.