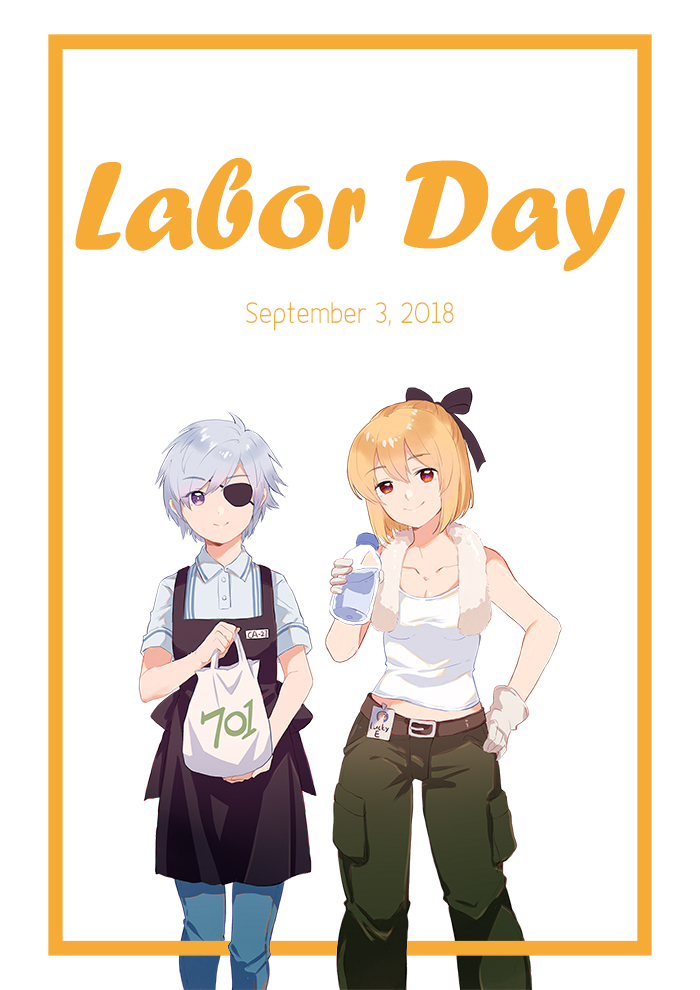 My understanding, too, is that this one’s pretty specific to us. Labor day to us Americans happen in September. There’s plenty of occasions worldwide, too, with many other countries (including most of Europe and several places in Asia) celebrating it on May Day (May 1st) rather than now.

Read on for a very quick history lesson. It’s the long weekend. I won’t keep ya from having fun. Thanks for dropping by!

Okay, before we get started, I think I should explain a bit about my (I, Enterprise) take on labor and its place in US history. In short, I think our labor movements grew out of a different set of roots than its worldwide counterparts. Our nation is a democratic republic founded on many core values, one of which is freedom. This freedom not only includes the pursuit of happiness or personal endeavors, but where our topic is concerned, wealth. It’s part of why we wanted to get away from the British, right, haha?

In those early days, America’s market was pretty much unfettered (I’m not saying this is a good or a bad thing). This led to both amazing advances (the “rags to riches” mentality that’s so prevalent in our cultural mythos) and terrible abuses. Workers, then, naturally wanted to band together in their interests. Generally, we’re talking about things like having fair pay for the services and goods rendered, the prevention of cheap labor (when prices get lowered naturally the workers lose in the short term), and, of course, better working hours.

In those very early days, things tended to be pretty calm. These early labor unions did their best to negotiate with their employers, and yes, strikes were called at times, too! However, incidents such as the Great Railroad Strike of 1877 significantly damaged the relations labor movements have with, well, everyone else. This one is definitely worth a read, but in short, railroad laborers and workers were fed up with their declining wages and rose up en masse in protest. The protests were violent and brutal, and the responses from our government was equally swift and brutal. Federal troops were mobilized, and the revolt had to be put down with force.

A month and a half later, about a hundred people died.

To the people at the time it definitely wasn’t nothing. What’s more, with events such as the French commune and other labor movements worldwide, America feared that we were going to fall apart in a violent rebellion, too. Labor relations basically ground to a halt. Corporations buckled down and doubled down, with many preferring to choose more violent ways of suppressing future incidents. From that point on, however, this idea that labor is associated with far-leftism and anarchy has, more or less in my opinion became engraved in the American psyche. What happened a decade later – known simply as the Haymarket Riot of Chicago – is basically a continuation of this.

Basically, what was generally a peaceful protest with reasonable demands such as the eight-hour work day (to us, though not necessarily to the people they were protesting!) became violent when one person threw a bomb at the police. A lot of people got injured. Both laborers and policemen died. You can imagine what kind of rhetoric was flying in the aftermath of the event.

To labor movements around the world, this was something inspirational and encouraging. May Day became a strong rallying banner for labor worldwide, which is why many other countries – Russia, China, and so on – recognize it today. For us, however, I think it’s important to look at historical context. When the American labor day was established, we intentionally wanted to pick a less controversial date, because it was in our interests to bury this event as much as possible. The American people didn’t want violence on their streets and most didn’t want anything to do with the far left, anarchists, or the assorted characters that (again, rightfully or wrongfully) are associated with this growing movement. If you were a politician in Washington, you’d want this even less.

Here’s an example of an article on Labor Day in the current administration, and one prior to his. You can see neither mentions anything even remotely close to the complicated situation that labor faced in its infancy. So, yeah, this definitely isn’t a “Republican/Democrat suppressing information” thing, but it’s a matter that’s flatly American.

That’s enough history for now. Get some rest! I’ll see you around. Work might be an all American value, but so is play, you know!