Even now you wonder who, or what, we really are. At some point you wonder if the rumors are true. Some have taken to spirituality or religion. Others to science or matters esoteric. All sought the same answer to the same question: what is a shipgirl?

Let me ask you a simple question, then. What are you?

No, really. What are you? What defines “you”?

I am Essex. That is all you need to know. 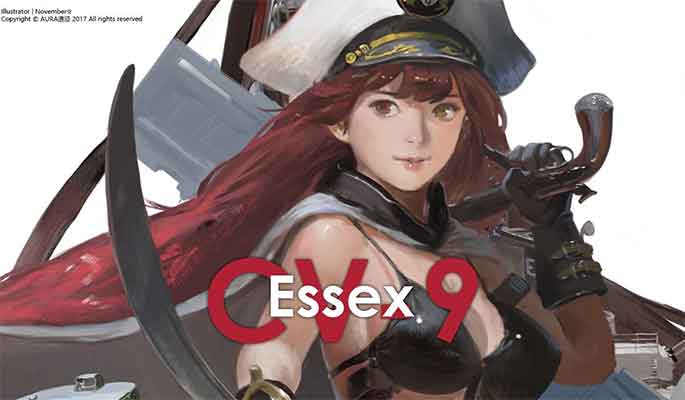 “May God protect and guide her through these perilous times ahead, that she may do her full share towards eventual peace.”

It’s got a nice ring to it, don’t you think?

Even after so many years, I could still remember the sound of her voice. Honestly, she sounded kind of shrill and awkward, like she’s trying her best to make the event as grandiose as possible. I laughed, then, even though no one could hear me. Or, at least, I don’t think anyone did.

In my earlier days, I thought humanity was so laughably paradoxical. We wish for peace, yet we have never gone a decade without war breaking out in some part of the globe. We desire prosperity and stability though we are too often the cause of our own poverty and the uncertainty in our lives. We yearn for freedom, autonomy, and truth, yet at the first opportunity we lie to ourselves to feel better, bind ourselves in arbitrary constraints, and slavishly put our minds towards the satisfaction of our every vice.

Take the crewmen that huddled beneath the flight deck of CV-9. You’ll never see a more sorry group of youngsters in your life. Discipline was lax. Gambling ran rampant. The desire for a drink was second only to their obsession with chasing pretty girls. Most of them had no clue as to what they were getting themselves into. Oh, sure, to the papers and the recruiters it’s all patriotism and God bless America and save the world, but they couldn’t hide from me. I can see inside the minds of those guys, you know, and their first instincts are often anything but noble.

Here’s what’s interesting, though. People change. People grow. Happened to every person aboard that ship. From the airmen above to the ordnancemen below, sometimes all it took was one act of selflessness to inspire entire departments into impromptu action. Efforts meant to cut corners and provide opportunities for slacking off morphed into genuine innovation and expertise. Creative endeavors to denigrate the ever-present disciplinarian gave away to professional respect, even as the officers became leaders and not just officers to the men.

It took me a while to come to terms with my own incredulity and confusion. I am not used to seeing everything actually in tip-top shape. At first I thought maybe there was some higher power at work, maybe increases in inspection or some other affair. It took me a while, like I said, to understand why they changed.

In the end, what changed these men was the desire for that great and simple American virtue of liberty. Fundamentally, liberty is the freedom for man to dictate their own destinies and to take control and responsibility for their own affairs. In doing so, the virtue of liberty places power in the hands of mankind itself. It cannot be given, but must be achieved through personal understanding.

Consider the disciplined life of an underway sailor. Paradoxically, these men, upon first glance, have very little liberty. They cannot decide for themselves the food they eat, the clothing that they wear, or the rules that they should follow. In some cases they had little choice in the decisions that belong to their lives prior. In cases where the ship come under attack, they have very little choice in what they can do to ensure their own survival.

So what is there for these men to do? How can there be freedom aboard a ship? The answer is that sooner or later, that sailor realizes that he always have the choice to choose how he respond to life’s adversities. The first time he falls into the ocean he can choose to give up and drown, or to swim and fight for a chance to live. The first time he stares down a plane he can choose to stare and be torn to ribbons or he could fight back with whatever weapon he can find on hand.

That choice, what we call personal responsibility, could be a burden. It could equally be a badge of honor, a source of motivation, or a fount of personal strength and power. To have something to be responsible for, you’ll soon come to realize, is uplifting in itself. The success or failure of that is up to you. The simple act of choosing to do is an exercise in free will. For some, it became the first step towards freedom.

By the war’s end? It’s like one of the ringleaders said, “Our boys became men.”

For all their inherent vices, these men chose to rise above instinct. Nobody would have believed me if I told them that in a mere few years a bunch of goofballs would end up turning the Essex into one of the greatest aircraft carriers to ever serve the United States of America. Yet, not many of them could believe their own eyes when I found them and expressed my gratitude in these years either.

They were an inspiration to me, too.

The other shipgirls talk about an awakening of some form when they decide to join the fight. Many have vague memories of the crew members, of the battles they participated in, or other highly memorable events. Some describe a sort of experience where they felt as if they were on the ships themselves watching things from first-person perspective.

Unless I happened to have been that one special someone who was allowed her way, I am certain that the other shipgirls simply aren’t remembering the details very well. At least for me, I had free reign to determine everything down to the color of my heels. I’ve got the goods. It’d be a shame if I didn’t flaunt it.

“Why not a uniform or something more mundane,” I can hear you ask now. Well, let me ask you this. First! You are on the verge of something incredible, where you are here for a great purpose. Do you want to look generic, or do you want to pick something that stand out in the crowd?

Second. You might not associate the crew of one of America’s greatest fighting ships with terms like “impetuous” or “wild.” For some reason, the Navy’s always given the impression that our fighting men are professional, disciplined, solemn, and overall a stoic bunch. I agree with professional, I might be convinced to agree to disciplined, but what I saw and what I remember were a group of young men drunk on life itself.

The men of the Essex can be humble when the situation requires them to be. By and large, they were a group of daring, adventurous, and sometimes reckless bunch of bon vivants. That buccaneering spirit shows well, particularly if you look at her very aggressive combat record.

Put it this way, I don’t usually dress to please, but if I am supposed to be some sort of “personification” of a ship, it’d make a whole lot more sense if I showed up in a flimsy piratey bikini and heels than say, dungarees and boon-dockers. Seriously, I know the boys well. Booty has traditionally been the great motivator.