Sometimes I skip a question because it’s relevant to a future update. It’s not because I don’t want to answer it.

“Since the abyssal thing is being kept hush-hush, I’m guessing shipgirls don’t appear at USO events?”

At least, not in the way you’d expect. For starters, there is no reason to believe that the USO even know STEC has shipgirls. 🙂

Secondly, after STEC goes public, the answer is still probably no for the vast majority of the situation. There are only a handful of shipgirls and you need them fighting the Abyssals or performing other objectives. I don’t think the shipgirls themselves would object (and I have a feeling Tennsy concerts might be pretty popular), but you really have to think about the practical situation and whether or not it’d actually be sensible to pull the girls away from the frontlines.

Honestly, the best case for the USO might be waiting to see if USO-fairies pop out of Avalon. Those might be better suited for their objectives.

“Makes me wonder whether or not Marble written her very own fan work or doujinshi during off duty.

Though, I wonder if her puns also transfers over to her works… XD” 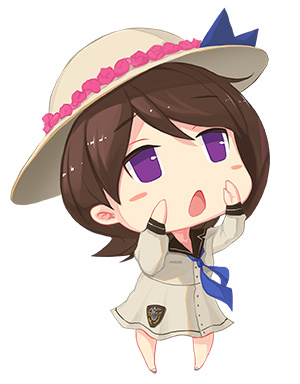 Heeeeey. Are you saying I can’t write? I can write! I am a significant contributor to the Avalon Weekly! Langley sometimes put my stories up on the kitchen fridge!

…That’s because Langley needs a calendar, idiot. The Avalon Weekly’s literally the right size for the freezer compartments.

Marby likes to write. It’s her hobby. As K9 mentions, she writes a large range of works. However, I’d like to point out that what passes for fanfiction for us (in the context of Pacific) is more like, Marby’s (sometimes very questionable) stories about her friends.

A shipgirl who declares herself a long-time reader of Marby (who, by the way, is definitely not Marby) speaks on conditions of anonymity. She describes her work as “tremendous,” but observes a distinctive tendency for her to veer off on very unusual directions.

Basically, coupled with her occasional head-in-the-clouds tendencies and you sort of “get” what kind of a girl she is. Marby’s a bit awkward in the sense that she has no real filter for what’s going on in her little head. If she thinks of something she’s likely to just blurt it out. It’s not that she doesn’t want to be social. It’s more like she’s BAD at recognizing that some things aren’t necessary, and she’s read far too much that her jokes end up either so esoteric that nobody gets them, or they’re basically really bad puns instead.

Naturally, Sune really likes to use Marby for her stories and the bits that she builds. She’s definitely one of the funner ones to use in that regard. The chibi Marby is definitely one of my favorite chibis because it just really, really fits her. 🙂