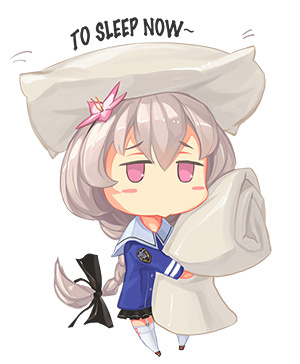 Some days, when I’ve had a long day, this is what I do in response. Literally I want to grab my pillow and go sleep.

But, then I take a look at the site, and went, hmm, what to show today…

Eh, a new shipgirl can be shown later. Some days I’m seriously tired and don’t want to answer questions. It’s not like I’ve stopped writing or reading, though. That is a sort of daily hobby at this point.

I think instead, I’m going to talk a little about one of the characters we plan for the next book. Unfortunately, much of what I know about her happens to be from family hearsay (and not to mention, family bias), since I have family members (still living!) who served on her during the war.

Yes, he’s aware of this project. In fact he’s made some very curious demands about her er, proportions.

No, I’m not going to have him pose with a cardboard cutout. I thought about it, and I don’t think the hilarity or the advertising it could bring is worth his peace and quiet. I’d rather that the character we created stand on her own, and said family member made it pretty clear that “his gal” was literally the best and doesn’t need anyone’s endorsement to be the best shipgirl ever.

Hoo boy. I know from lurking about that WWII veterans come in all shapes and sizes. Mine just happens to be … very open minded with the idea of shipgirls and whatnots. He loves the idea of Pacific, and absolutely finds this whole thing to be hilarious. In fact, he showed me some sketches from below decks (apparently the navy had a strict policy at the time about pin-ups and whatnots, but below decks where officers hardly lurk, that’s another story) and basically said, yeah, your girls need less clothing on them thanks.

(So in other words he basically think like Sune.)

… What, were you expecting some high-browed opinion? Not everyone’s got families of generals and admirals you know, though, come to think of it, a few did get fairly high up the food chain…

Anyways, should be interesting. We did sit down and basically lay out exactly what kind of a girl she’d be. To be honest once you hear some of these sea stories, I really, really, really can’t see her being written any other way.

And, yes, someone‘s got competition…