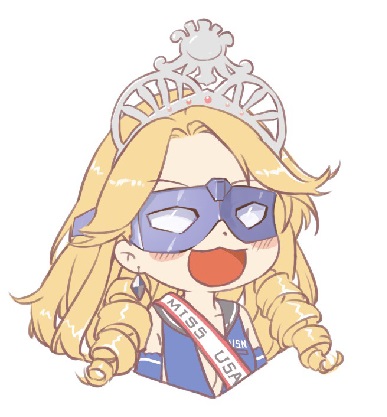 Due to the nature of soldiery, military culture is uniquely suitable for the development of urban legends and modern mythology. The extraordinary – often described by the press as “fantastic” or “supernatural” – nature of STEC’s work offers a fertile ground for such tall tales.

I won’t ask everyone to play along, but give it some thought please. In my opinion, Commander Jer is pretty serious most of the time, so if she’s having fun, that’s what matters to me.

I send this email out about once a year, so my apologies if this is redundant. However, given the influx of new shipgirls joining our ranks this year, I feel inclined to debunk one of the most persistent, albeit harmless, rumors that crops up after every major Abyssal incursion.

The story goes something like this. There’s a mysterious, unidentified shipgirl wandering around the high seas helping our forces out, often at points with the hardest and most dangerous types of fighting. Nobody knows what type of shipgirl she, but everyone who’s ever “seen” her – physically or electronically – agrees that she’s blonde and wears a distinctive mask.

I’m aware of the rumors out there suggesting that this is in fact, me, and I would like to offer you my thoughts on this specific subject. In one word, impossible. The “mysterious shipgirl” is not real, and we’ve abundant evidence proving this to be the case over the years. She’s definitely not me.

Yes, I’m aware of the fact that there’s a high-level STEC representative who testifies to Congress who looks kinda like me, sounds like me, is about my height, and knows what’s going on as well as me, but take a closer look. She’s got a pair of sunglasses on. Have you ever seen me wear sunglasses?

If you have any questions or thoughts, feel free to let me know. Thanks and I hope this clears things up

Good god, one of my girls actually fell for it for real this year.

You wanna take this, since it’s your prank? Or are ya still gonna be “in character” until the 15th?