Other than official diplomatic functions, STEC’s shipgirls often interact with interested parties seeking intervention or collaboration. To STEC’s own knowledge, no such actions have taken place within the United States.

This exhibit rotates a number of private shipgirl correspondences on a regular basis in an attempt to communicate to the public at large how shipgirls may approach or think about a particular issue pertaining to the application of their own powers. A visitor’s log is also attached, where legible queries & comments will be sent to the shipgirl in question on a regular basis. 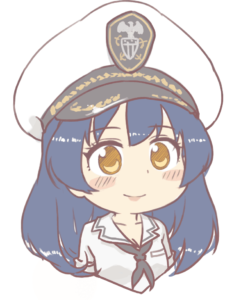 Everyone, thank you for joining me today. While I’m not speaking in any sort of official capacity, I do hope that today’s session will be helpful in clarifying why we do certain things the way we do.

The eight of you gathered here today are the leaders of companies of, hmm, last year’s reports indicate that you account for something like eightyish percent of all of America’s growing “computer” industry.

We will not collaborate with anyone here, nor will we be providing any assistance – conceptual or technological to you, your collaborators, or your rivals.

(laughs) I think we can honestly end the meeting right here, right?

“Are we on the right track at least?” I’m afraid I can’t explicitly answer that question. You’ve seen a bit of what we can do, so I think it’s up to you to decide if that’s something worth dreaming about or worth bringing into reality.

“I agree with the reasoning but I still don’t like it” is one way of looking at it, but I think if you think about it in another way, it’s the reality of the world we live in today. “Supernatural” forces like us or the Abyssals exist. One seeks only to disrupt, so we – the “counterbalance” – must react accordingly.

Sometimes the hardest thing to do is indeed, not interfering. Those of you who are parents, how do you feel when your children stray into the world at large, and come out full of self-inflicted bruises?Depending on the nature of their relationship, different people will react differently, right? Some people think it’s well-deserved, some think it’s a necessary process, and some would rather that they get hurt instead of their loved ones.

What is our relationship with humanity at large?

Tough question, isn’t it? Especially since you’ve got people more than willing to worship us as literal gods.

I’ll go out and say that a lot of shipgirls are still exploring this question, but for those of us here at STEC, we all agree on one thing, we’re human. That means we shouldn’t try to play God with human civilization.

This doesn’t mean that we’re somehow venturing into comparative morality territory – otherwise I don’t think we’d even bother (laughs). We’ll just let the Abyssals nom up the planet because from their perspective we must be evil, right?

We do not know what the Abyssals are, but we are certain of one thing: they aren’t part of the natural order, and that their existence is an anomaly. They obviously don’t see themselves as human, and in fact, they seek to actively dismantle humanity at large.

We, to stress this again, are human. Therefore, we have no qualms or doubts about the necessity of intervening against these attempts to disrupt civilization. To protect humanity means protecting everyone from these extraneous influences.

Are we, as Americans, viewed as liberators or conquerors over these last decades? How about during the 1940s, against the backdrop of that turbulent world? STEC today is “America” to America and the world at large. I’d have used Satan as the Abyssal analogue, but given my uncertainty of everyone’s religious persuasion, I figure something within memory like the Second World War might make it easier to relate (laugh).