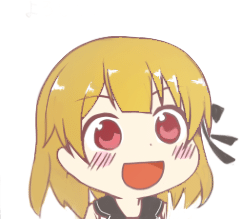 I’m gonna tell you a story about my real-life counterpart.

Well, actually, not quite a story! It’s more like a bunch of little anecdotes and tales that string alongside one another.

I’m sure you’ve seen the memes. Enterprise vs. Japan! Enterprise the greatest warship of the WW2 U.S. Navy. Enterprise, the symbol of the USN.

Whenever you talk about Enterprise, inevitably, one point comes up. Namely, she wasn’t preserved and kept as a museum ship. She was scrapped mercilessly. Politicians are soulless! How horrifying! So on and so forth.

I said in my introduction to you all, in Pacific, that I would prefer that fate. At the time, I – speaking here as my historical counterpart, and not as myself – is a stark reminder of a terrible war that people were all too eager to forget. Keeping the Enterprise as a museum misses the point. A warship is a being of the sea. She deserves to sail out on the ocean waves, much like how you’d expect a tank to roll merrily along on the hillside or an airplane taking off into the deep blue skies. To me, tethering a ship to a pier is a lot like trapping a lion in a cage. Then there’s all that stuff you have to do to keep a museum ship afloat. It’s a lot of hard work.

Something else you guys probably didn’t know either was just how many of the crew felt about my historical counterpart’s ultimate fate. You’ve heard – in real life, in Pacific – that Halsey worked his rear off trying to save the old girl or something about the impossible deadline and the even more impossible deadline Congress gave to the Enterprise Association, right? There were a lot of folks that wanted to see her preserved. But, there were other opinions, too.

Take O’Hare’s combat buddy, Alvin Kernan. When asked about how he felt, he answered:

Kids running about screaming, selling of candy and ice cream … it always seemed degrading. I always felt the Enterprise was truly noble and I didn’t want to see her tied up.

When Morgane did her research to create me, one thing she noted was the reverent attitude of the crewmembers whenever the Big E was brought up. This sort of awe-inspiring reverence was unique out of all the ship’s histories that she had encountered, and that attitude and mindset was something that she (and I!) had to share with our readers.

The brave men of the Enterprise cried when she went to the scrap yards.

Many a hearts were broken. Some men who never showed emotions sobbed like children, if words of family and friends are to be believed.

But her soul? Her essence? That lives on.

Pacific’s main focus is on humanity. We pay attention to the men just as much (and oftentimes more) than the fighting machines.

You know of CVN-65, the next Enterprise. Did you know who her first skipper was? It was none other than Captain De Poix. You’ll likely know him as Lieutenant De Poix, one of the Fighting Six.

Kane went on to command the Saipan. Strong went on to command the Lexington. Vejtasa took the Constellation and created the U.S. Navy’s top gun school. Hyland took overall command of the Pacific Fleet as a full Admiral. These and countless other Enterprise men went on to do great things, all because of a shared experience that bound them together.

Within the Navy, outside the Navy, the Enterprise produced generations of leaders from squad-level to movers and shakers of nations. Every successful warship produces men of great character.

The Enterprise did her part there, too. That is her legacy. That is how she lives on – not as a taxidermic curiosity, but as a collective of individuals carrying her ideals onward.

In that sense, some ships really can live forever.