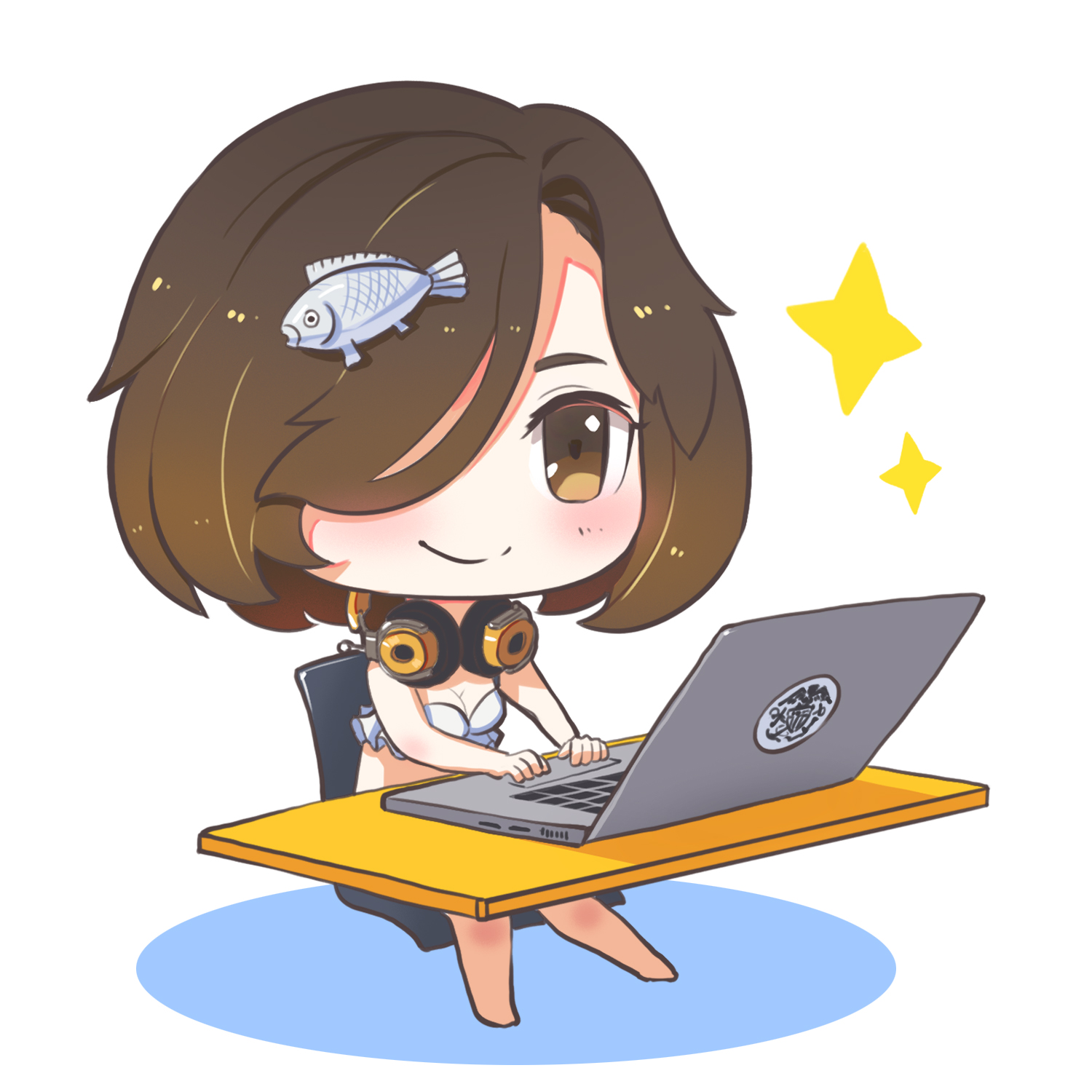 (I like this particular thing because it makes me look cute, okay! I’ll probably use it as the page-image for all non-specific-submarine sub corner pages. You know, the ones where I talk about things relating to submarines, but not necessarily the submarine itself!)

Okay! It’s been a while since we’ve had one of these. This is because a lot of the questions I’ve gotten are sort of hard to answer simply.

My history textbook mentioned the submarine today! It said that one of the most important things submarines did during both World Wars is that they were able to cut off the economies of the Axis powers by creating naval blockades.

I’m not sure I get this. After all, in the very same page, not every German or Japanese ship was sunk by the submarine force. So, could you please explain a little about how this stuff works, then?

Sure. Let’s take a look.

First of all, I think it’s safe to say that we understand what a blockade is and what it does. A blockade is an effort – militarily, politically, oftentimes both – to cut off and isolate a particular country’s access to certain economic resources. In ancient history, we think of food as part of sieges. In World War II, you think things like oil or metals or other materials of war. In modern day, the world you live in, these sometimes take the form of “economic sanctions,” which largely accomplish the same thing.

Ultimately, the purpose of a blockade is simple. It’s going to help my country (the one doing the blockade) to win against yours. Thus, before we even start thinking about whether or not blockades are moral or ethical, we need to ask the question: can we even carry out a blockade in the first place?

A very simple way to think about this is as follows. Suppose you are at war with me. Suppose you live on an island nation. Suppose I have a million submarines that can sink any ship that carries supplies to you. Without an internal source of say, food production, you would quickly run out of food and starve, right? In this case, obviously a blockade would be an effective tool against you.

You, of course, likely would know that this was an option that I could play. Thus, you would carry out certain policies nationally to make sure that I cannot carry out a blockade – for instance, investing in anti-submarine weaponry, or creating food stockpiles to last throughout the war, or make sure you can produce what you need yourself, things like that.

But what if there’s a third country here who’s just interested in selling stuff? I’m not at war with them. They’re neutral. Should I go ahead and sink their ships too?

So, you see, it is a bit of a complicated story. I’m going to give you two examples of submarines and their attempts to carry out a naval blockade. One worked. One didn’t. Let’s take a look at the one that didn’t work, which is Germany’s attempts to blockade the United Kingdom during World War II.

So, for a blockade to work, we need to look at the following.

I think 1 is easy. Britain is an island. Naturally, it’s vulnerable to naval blockages.

2 is a little harder to answer. We do know that Churchill was very worried about the potential of Axis submarines running amok, but the Kriegsmarine itself had very dim views of their own potential – there simply weren’t enough submarines to do the job.

Do you remember the super ambitious ship-building plan called the Z plan? The one with all those big ships and whatnots? Under the Z plan, only 162 U-boats will be in the Atlantic, and most of these would not come into play until 1948.

Doenitz, one of Germany’s best submarine strategists, basically said, yeah, this can’t really work. As early as 1938 and as late as 1939, he communicated extensively to German high command that he would need at least 300 or more U-boats to be able to starve out Britain.

Naturally, Hitler did not take him seriously until well after the Fall of France, where Britain had a lot more time to prepare against the incoming threat. In that sense, I would say that 2 is also reasonably true at least for the early parts of the war.

As for 3, this is an interesting matter. Remember that the US is explicitly “neutral” for the first parts of World War II. The US Neutrality Act of 1937 (and later on 1939) basically constrained our ability to help the English during the war. However, even so, we were able to provide quite a lot of support. You’ve probably covered lend-lease in your books, but I’ll just remind you of the destroyer-for-bases deal where we sent over fifty old destroyers along with a lot of anti-submarine equipment. Clearly, we were already planning for war against Germany.

So, here, then, Germany has failed at 3. It could not convince America to stop supporting Britain. Germany’s only option, then, is to engage in warfare. In fact, Hitler declared on August 17, 1940, that all neutral ships would be sunk on sight.

Did the blockade work?

The answer is, well, Britain didn’t lose the war, so obviously, no.

Why didn’t it work?

Well, let me quote one of my favorite historians, Samuel Eliot Morison.

The United States and Allied Navies and merchant services thwarted the submarine by efforts all the along the line, and in four particular dimensions: Doctrine; Research; Training; Production.

Let’s consider doctrine first. Pretty much all submarines started out fighting as lone wolves, attacking silently (heh) against an enemy convoy. Germany, of course, was famous for its wolf-packs, where anywhere from eight to dozens of submarines were coordinated by a single command and attacked convoys or ships all at once.

Initially, on the Allies side, we suffered greatly. It took us a while to start using convoys. Even so, it took us a long while to figure out how to fight the U-boats effectively. At some point Bogue’ll probably show up to tell you about this herself, but I’m just going to say that Allied anti-submarine doctrine grew steadily over the years. First, we added radar and other technologies to detect submarines. Then, we added the aerial component with many planes specialized in anti-submarine operations.

Finally, and this is what really broke Hitler’s U-boat force, is the availability of escort aircraft carriers. See, before the CVEs showed up, there is a pretty big part of the Atlantic ocean that Allied aircraft could not cover. Once ships such as the Bogue showed up, even this gap was closed. The US started operating anti-submarine strike groups to hunt down the U-boats actively, which ultimately contributed to the demise of Germany’s submarine force.

Research and training are two sides of the same coin, and I’ll just briefly allude to some of the developments on both sides. The Germans had several innovations, including the snorkel which allowed its submarines to charge its batteries without surfacing and better U-boats that could go on patrol for longer or better torpedoes. The Allies, however, had a lot more weapons that were cranked out during the war. These range from various anti-submarine aircraft like the PBY or even Wildcat fighters to the “Huff Duff” (High-frequency direction finding, a sort of radio direction finder) to better depth-charges.

In the end, if we are going to look at both sides, it’s very fair to say that both sides made a number of potentially deadly errors. These range from not having (enough) destroyers escort convoys on the Allies side to Doenitz’ demand that the U-boats fight it out against incoming Allied aircraft with their AA guns. The bigger issues, however, are matters that are fundamental. Doenitz was never able to get the Luftwaffe to work with him. The Allies had some friction between the various forces, but it is a combined arms approach that ultimately worked out for the Allies. The Allies also were miles and miles ahead of the Axis in intelligence work and cryptography. While the Germans were able to enjoy some initial successes thanks to their own analysts, they could not penetrate the Combined Cipher Machine.

The Allies’ story with Enigma you probably know about, and so you know how that worked out.

What haven’t we talked about?

Production, of course! It’s the elephant in the room. It’s clear that the Germans were outproduced by the Allies in the war. But, you need to ask yourself the question: could Germany have ever produced enough submarines to win the war?

Well, the answer is, yes, since there is always a hypothetical yes to all of these things.

However, let’s think about how many ships the Allies – primarily America – built.

Doenitz had no idea just how many ships we were cranking out. Had he did, I wonder if he’d ask himself if the U-boats had enough torpedoes in stock.

Could Germany have built enough submarines to sink all those tons of new merchant ships? The answer is, hypothetically, yes. Let’s give the Axis the benefit of the doubt and say that the Allies were completely incompetent and left their convoys unguarded, so that they’d be sinking the maximum tonnage observed in every war.

Doenitz asked for an extra 300 submarines. To offset the number of merchant ships (or, to break even), he needed about five thousand submarines.

That’s assuming we did nothing to check his advances, or did nothing on our own end. People who speculate endlessly about “what if Hitler did X” assumes that the Allies are stagnant. I’m just going to point out that we were the ones who figured out how to build ships super fast. In 1939 a “liberty ship” took 140 days to build.

See why the German blockade didn’t succeed? Even if they weren’t outmatched in all those other things, they still could not beat Allied production. Their best option would have been as they did: to try to break the will of their opponents and force a surrender, and they did not succeed.

Hope that was helpful. I’ll probably talk about Japan next time we’re on the topic!