Hi everyone! Tautog here again. With 2016 out and done, you’re probably curious to see: what are we doing next?

The answer is more housekeeping. Plugins need to be maintained, supplies need to be kept. More importantly, the team needs time to basically organize and consolidate all the things we’ve done over the last couple of years and put it here where our readers can find it.

This means not only translating the books and our releases in Asia, but also to put up all the expanded “universe” type stuff that Morgane leaves around the forums, the other communities, and so on and so forth. Let me give you an example. 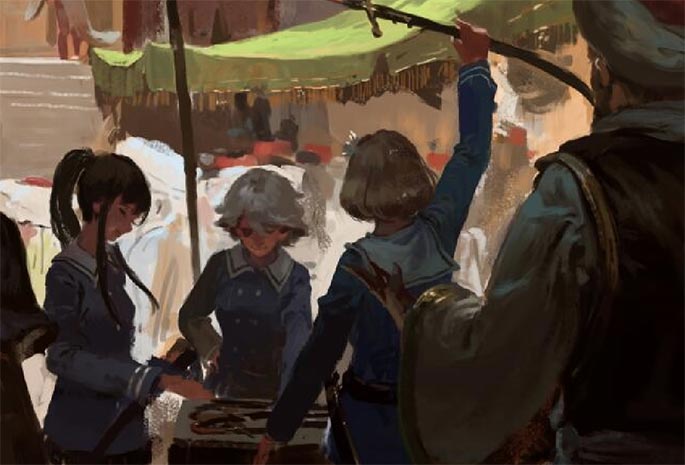 Why is Lulu, Chester, and Northampton visiting what looks to be a stall somewhere in a vaguely Middle-Eastern region? The main text of OCEAN really doesn’t tell you much about what’s going on.

Well, that’s because we didn’t put the short story into the book. There’s very little context for how, or even when this event is taking place. The book itself only offers a short exposition detailing how Chester is trying to pay for the swords she found, only to find the shopkeeper happily refusing her payment.

Northampton, exasperated as usual (and obviously not understanding the language), tells Chester to stop haggling. “Making money in these parts aren’t easy, you know.”

Louisville is here to be confused and comment that she doesn’t understand what’s going on. The very few lines of text in the book ends there.

What actually happens behind the scenes was actually that the pictures in OCEAN were supposed to all play into something larger. There’s a reason why the girls are here in the Middle East. The picture takes place after a diplomatic mission working with the representatives of RN-STEC and the French Consular Office. The girls are out shopping. Chester is actually gossiping purposefully.

See, swords are not particularly common for “street vendor” type goods. They are costly to produce and not at all efficient. Daggers are far more common. Northampton or Lulu might not think about it much, but Chester is far more observant than she lets on. Part of the reason why she even stopped there in the first place is that in the biggest tourist trap in the area, this particular stall happens to be well-kept and well-maintained, yet somehow, for whatever reason, it has virtually no customers. (Especially if you look behind the picture and see the stall immediately behind her!)

A brief conversation reveals to her that her hunch was correct. This was definitely something exceptional.

So, being the crafty girl she is, Chester basically brings her friends with her the next day to keep up appearances. To ward off the prying eyes and ears of the English delegation that’s hanging nearby she intentionally acts a bit more dumb than her usual self. The deception works, and not even her sisters suspect that Chester had a plan up her sleeves.

This particular episode was supposed to lead into an adventure of sorts, where a new type of Abyssal drawn by Sima would be revealed. The adventure is written (albeit slightly unpolished), but as you can see, in the busy lives of the Pacific team, it never got posted.

I think a strength of the way in which we tell stories is that everything is purposeful and everything has a reason. A short almost SoL type story as above is meant to tell the reader about not only the shipgirls, but also the region, supporting characters, the setting like the technologies available, and set the tone for the world at large. A weakness, of course, is the schizophrenic way in which we present content. Due to again, mostly constraints on time (busy real-life work for the team means Pacific gets updated slower), you can see that the timeline is only now beginning to be filled up, and there’s still a lot to go before we’d be happy to “push” the plot forward.

Silent Service is helping with that. While Pacific’s past illustrations take place across a span of almost thirty years, Silent Service is explicitly focused on the most “recent” – that’s to say, during the earliest days of Mike’s (Pacific’s protagonist, the “teitoku” equivalent for KC players) tenure. International events in Silent Service – whether it’s Dracha popping in or Lori’s tale or the stuff involving the Soviet subgirls – all play a part in it. I think it’d make much more sense once we start dumping more stuff involving Hata to start “closing” off the book. You’ll see!

So, as I said earlier, the task for Morgane this year is not only to keep Silent Service and the other books going. She need to also start actually putting stuff on the site and figure out a way to not only make it presentable, but also make it organized.

No small task, that’s for sure, but I do know she’s taking a crack at it pretty much whenever she has time. After all, we aren’t going anywhere. 🙂