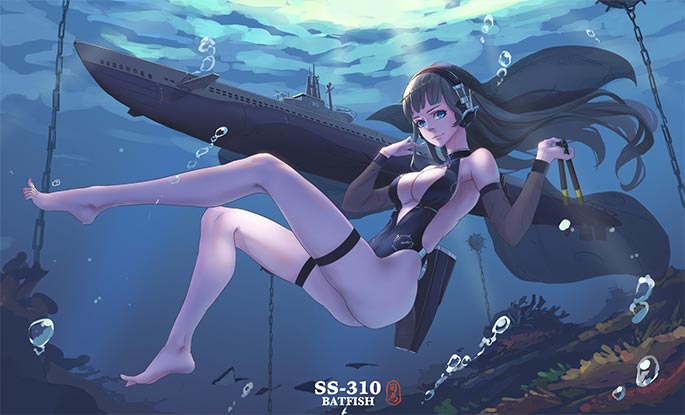 Hi everyone, it’s Tautog here again. February is always a busy month. In America, it’s a month without a federal holiday (and also flu season, which is hitting everyone!) despite being a shorter month. In China, it’s generally the New Year season. That means our artists, translators, and other team members are doing stuff with their families back at home.

You can tell that the upgrade schedule’s gone from almost daily last November/December to basically every 2-3 days. It’s a seasonal thing. We’re still moving all of our stuff along and doing our best. So thank you for keeping an eye on us!

Now, with that being said…

I was reading the book you recommended me, the one by Captain Roscoe. Something in the book stood out to me. The book says that the submarine force was “an all-voluntary force” and there is a special sort of pride among the submariners.

Do submarine shipgirls have the same thing? Are the shipgirls similar?

Well… That is a good way to ask a few questions that I think is pertinent. CORONA, feel free to FAQ this after I’m done!

To start, the “sort of pride” you are describing is not unique to any particular military branch or organization, but the nature of warriors in general. From ancient times, people who put their lives on the line have had a shared brotherhood with others. In World War II, this is evident, too. From Sherman tanker crews to sticks of paratroopers to the naval aviation community to, of course, the submarine force. I’ve talked about this in some of the sub corners.

Are subgirls proud of being shipgirls? Yes. Are they more proud of being subgirls than shipgirls? On the record, I would say that’s not the culture of STEC. Certainly not under Cmdr. Yin’s leadership, which is in line with the decisions made in prior commands.

Off the record, you will find plenty of us ribbing one another about the obvious superiority of each one’s specialties. I mean, we’re basically a gaggle of young women, it’d be weird if there ISN’T gossip, right? However, I’m pretty proud to say that we’ve got no interpersonal issues. Unlike the shipgirl services of a couple of other countries I can think of, our “Interservice” rivalry really isn’t a problem. In fact I would say that it doesn’t exist.

Now, asking whether or not a shipgirl’s service is voluntary is a self-evident question. If we weren’t volunteers we wouldn’t be here.

Are subgirls taking more dangerous missions than the other shipgirls?

I would say that the answer to this depends. In general, I would say the dangers are similar, but not necessarily approximate. Yes, submarines don’t have to fight giant sea monsters, but they – as a whole – faced a lot more dangers that us subgirls are immune to!

In real life, submarine casualty rates were very high. It was definitely one of the most dangerous “jobs” in the entirety of the US navy. On any other ship you had a good shot of surviving a sinking. Not so on a submarine! If your sub went down underwater it was going to be lost with all hands. Wartime cases in which submariners survived their sinkings all occurred on the surface.

The submariners of WW2 couldn’t stay underwater without the protective outer hulls of their submarines. We can. Submarines are more or less sunk if they’re hit by a single torpedo or depth charge. We shipgirls have an innate sort of field of protection, which helps a lot. A submarine could get lost (both literally and figuratively) due to equipment malfunction. A subgirl without her equipment can still swim to safety.

You get the idea.

Now, if you compare shipgirl to shipgirl, it raises an interesting question. In general, I’d say that if a subgirl gets in trouble against the Abyssals, STEC has fewer options (comparatively) to help her out when she is underwater. We’ve alluded to projects in development to address this issue, and Cmdr. Yin has implemented certain policies (for instance, insisting that subgirls be sortied, at a minimum, in pairs) to remedy the situation we have.

So, are subgirl missions more dangerous than a surface shipgirl’s? I would say that it is riskier as opposed to more dangerous. Riskier, in the sense that there are fewer things STEC can do to ensure the success of the mission. After all, every mission is dangerous!

As I’ve said here earlier, subgirls largely operate like the other shipgirls. STEC does not currently have plans to create specific, dedicated submarine girl “bases” because we aren’t submarines!

So, to answer the question, I’d say that shipgirls in general get a lot of perks. We have all of our needs and wants taken care of. Actually, you’d first be surprised to see how little money STEC actually spends on the shipgirls as a whole.

So, therein lies the first issue. A portion of our soldiers do join out of a sense for adventure and glory. Many advertisements will detail the potential for career advances, the rewards and medals, and even pay or bonus pay. From my interaction with the now three-digit shipgirls here at STEC, that really doesn’t apply to us as a whole. We’re here, we’ve got a job to do. Give us the tools we need to succeed and we’ll think about all that other stuff later.

… You know actually. I don’t ACTUALLY know how much my “salary” is. I should probably check, but to tell you the truth I really haven’t had the need to spend any of my own money. Florida and Northampton and the girls managing the private finances send everyone like quarterly earnings reports and whatnots but I think most of us never opened the envelopes. I’m pretty sure that it’s fairly ordinary pay, though. I know that STEC’s superiors are always surprised at how lean the whole operation is.

So, yeah, I, um… I don’t really need to buy much of anything. I visit the shop for new clothes twice a year. Personal care items are all taken care of and supplied regularly in a communal group anyways. I haven’t needed to travel much either, but STEC takes care of that.

I guess I do like buying new books every couple of months, but I get them for our library and I don’t really think of it as “mine,” if that makes sense.

Hmm, I guess I will have to get back at this question later. Sorry!

Do subgirls get better food?

No, but I’d say that subgirls on average are better cooks!

In our historical counterparts, navies have good food. Again, it’s a bit like hazard pay. Given the difficult conditions that submariners find themselves in, good food is a great morale booster. This is true for shipgirls as well, but as always, there are caveats.

For starters, STEC’s mess halls are ran exactly like a submarine’s. Officers like Mike or Jer have their own separate eating space mostly due to function (you’d be surprised to hear how many meetings take place over mealtime), but everyone gets the same food served at designated times.

If you miss mealtime, you have a few options.

Firstly, there are automated vending machine which have items with calories in them. They range from snack foods like muffins and cakes to frozen dinners and pizzas and the like. Tambor and Lori and Dracha and some of the girls absolutely love the pre-packaged stuff. I happen to prefer just waiting for the next one or, if I’m really hungry, to make something myself.

Secondly, in each of the living sections of the shipgirls, we have our own kitchens that are typically stocked with groceries. Shipgirls can add to the weekly or monthly requisitions for their personal use if they cook regularly (Trout for instance always have a meticulous list of the types of flours and things that she’d like that we can’t get locally – more on this in a bit), though my own understanding is that many girls actually just go down to the kitchens and document what additional things they’ve taken since cooking happens often on a whim.

You might find this policy to be a bit odd, but for a lot of us, cooking IS a recreational and social activity. So while we don’t need to cook for ourselves, a lot of the times we want to!

Wanna know a secret, though?

Self-sufficiency is great. You look at the average menu at STEC and you might wonder, isn’t it expensive to have lobster on the menu THAT regularly? All that prime cuts of beef couldn’t be cheap either, right?

Yeah, but who said that we were purchasing the stuff at market price? STEC’s shipgirls are a self-sufficient group. We’re proud of our independence, and the ability to take care of ourselves is quintessentially American! Thus, figuring out how to feed ourselves is a part of our culture, too.

Let’s not talk fishing, since that’s obvious and easy. How much effort do you think it’d be for shipgirls living on a floating island to set up some traps and catch our own lobsters and crabs, especially if we can dive way deeper than any human diver?

How hard do you think it would be for the brainy gals like Cusk or Mahan to figure out a way to raise scallops or barnacles if we’ve already figured out how to eliminate biofouling from Avalon base?

With girls like Iowa and Des Moines and Weavy around growing our own things isn’t a problem, either! In fact, that is a part of Avalon’s design. We actually have facilities designed explicitly for food supply. You can do a lot if you consider the Y axis, too!

So, given that we produce a lot of our foodstuffs, it’s natural that a lot of us are interested in cooking. Since subgirls tend to return home from deployments and missions on unusual hours, knowing how to cook becomes a good skill to have. Whether it’s making food for each other or just doing a midnight food run!

Are subgirls trained to a higher degree of expertise than other shipgirls?

Yes and no. There are additional things that subgirls have to know how to do. In addition to doing all of our surface warfare drills and assignments, we have that underwater component to it, too. Along the way comes a lot of basic equipment repairs and field maintenance. Not saying that the BB girls don’t know how to do that stuff, but I can guarantee you that we’re much more adept at it.

The reason here is actually the same as our historical counterparts. On a submarine, the submariner is directly responsible for the lives of all of his fellow submariners. A torpedoman is going to have to know how to do the job of an electrician and vice-versa. For us subgirls, because we operate in a different environment, the additional training and expertise is a good way to further reduce operational risks.

So, to sum up, you can see that there are clear differences between subgirls and the submariners. It’s important to remember that while shipgirls have classes similar to historical warships, the actual nature of shipgirl operations, combat, basically everything, can be quite different!