Tautog here again! Before I start I want to say: USS Pampanito (the submarine) is still around! You can visit her in San Francisco, or check out her own website here. 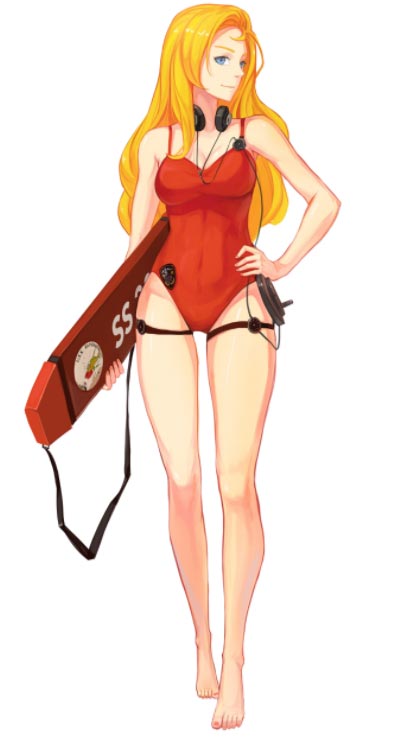 Alright guys. I know what you’re actually here for. Subgirls in bikinis. Well, here’s one.

That’s not a bikini you say?

Well, let me put on Morgane’s glasses real quick. “Basically, I think we’ve written about this before. To maintain consistency in our subgirl’s designs, naturally they have to wear a swimsuit of some kind. It doesn’t make much sense otherwise.”

Bleh, I’m getting bored already pretending to be her. Okay, so, first things first. Most of us are actually written with a particular point to illustrate. For Pompanito (Pam, to you and I), the team thought the biggest thing to highlight in addition to her war patrols was her near miraculous recovery of 73 Allied PoWs from a hellship. The Pompanito picked up every person she saw, and managed to save the life of all but one of them.

Sorry! But, you know, that was a remarkable moment.

You betcha. Submarines played babysitter and lifeguard a lot, and I’ll actually be talking a bit about US submarine rescue tactics in my own corner. In any case, you can get the full account from Lt. Comdr. Davis here.

Thanks Pam! Anyways, because we’ve got more than one medical doctor (freshly minted but still, an MD nonetheless!) on the team now, you can imagine that submarine medicine was something that part of the team became interested in.

Thus, we already had some idea of how we want Pam to look like. We did play a bit with the idea of “medical bikini” or “nurse bikini” but those just didn’t end up fitting her persona. From our reading of books such as Silent Victory and of course, the association site (not to mention at this point most of the team has set foot on that submarine at one point!) we felt that the “spirit” of the Pompanito is really dutiful and responsible. So, naturally, we ended up going with a lifeguard design for her instead. It also sets a very nice contrast with a lot of the other subgirls such as Bats who wears much darker colors.

So am I gonna get a profile in the book or not?

Okay, okay! We’ll cut it off here today. See you all next time!