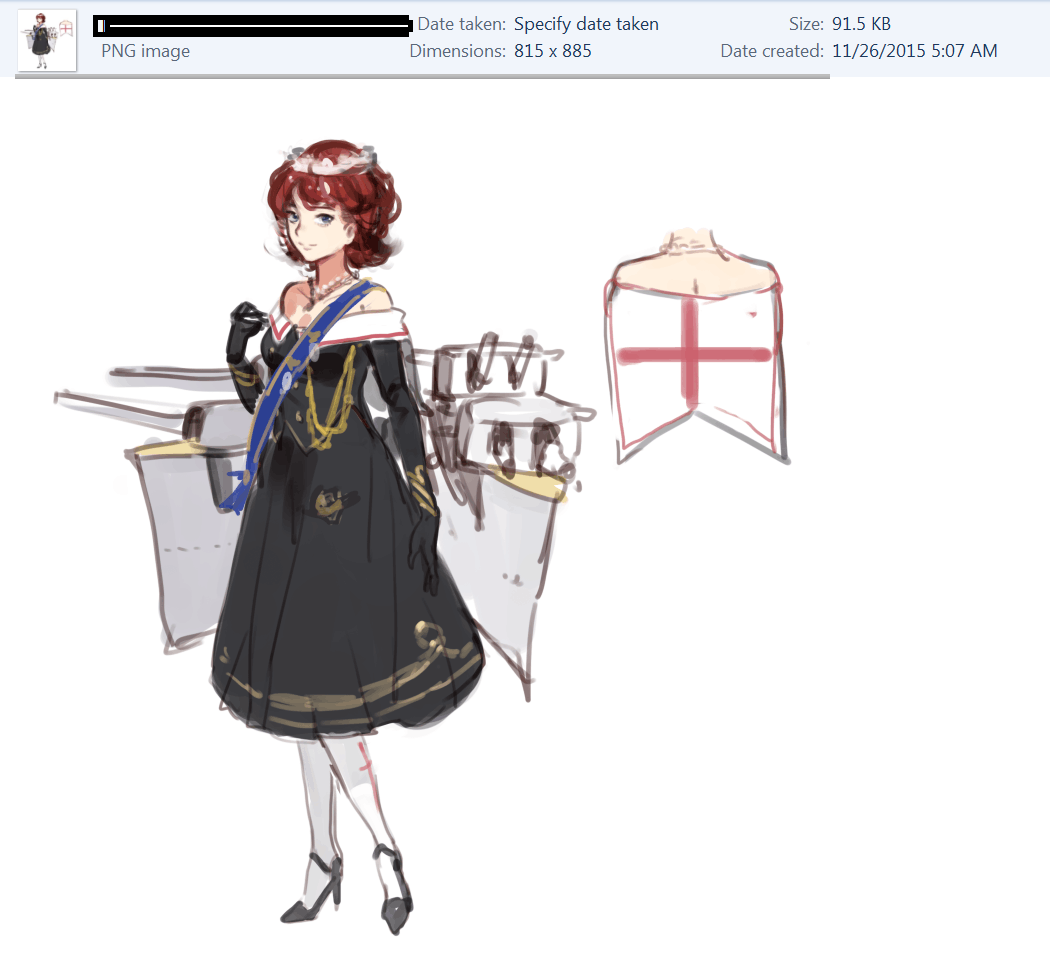 Or what should really be titled “How Pacific “canon” works in terms of character design.”

About a couple of weeks ago one of our readers wrote in with this comment.

Despite the general hostility some of your team members have towards the UK a deeper glance into Pacific’s history reveal quite a bit of interaction (mentioned) with the Pacific shipgirls.

I understand that maybe the artists are not necessarily into the Royal Navy. Furthermore I do understand too that there are other shipgirl games and franchises that do have British shipgirls (the Warspite is one such example) however I was wondering if there has ever been any significant work done in a Royal Navy shipgirl?

So, to answer this question, I’m going to basically have to start with how Pacific came about. You’ll notice that unlike the other KanColle derivatives/clones/etc we actually generally don’t overlap with KanColle characters. The reason here is that, to speak of things plainly, there is no need for us to do so.

Other games need to take customer shares from KanColle. We don’t. Being fans of the franchise aside, Pacific is literally a creative project. At most we do (for now, anyways 🙂 are some books. Anything we make tend to have the very explicit goal of making ourselves happy and entertained as well as to build up Pacific’s overall world. We’re makers of shipgirls. That hasn’t changed. We’re basically interested in getting people more interested in the Second World War and offers the Allied perspective on things. That hasn’t changed either.

What has changed is the increasingly large number of characters that Pacific has in her “repertoire.” And, because I’m interested in building as good of a “world” as possible for our girls, you’ll see plenty of non-Americans surface. This is why some characters nominally relegated to the background have been fully illustrated at this point. Lori is actually probably the best example of the bunch. Originally, we had envisioned a trio of three U-boat sisters (Lori, Dracha, and Ulla) each representing a particular perspective of Germany post-war. That was in early 2016. It took mid-2017 for us to get to around drawing the other two.

The Royal Navy is in the same situation. Plot-wise they’re kind of very important. With the RN-STEC active and up and about STEC can focus on the Pacific (and the geo-politics that go on in the near East) exclusively. In some parallel universe I’m sure we’re creating a book called the Atlantic (oh, wait, Maria’s actually doing something very similar to it) and slowly expanding into the Pacific.

Unlike Pacific’s main cast, however, Royal Navy shipgirls that we create tend to fulfill specific plot functions. With the exception of Edda (who is a personal favorite and a regular) they tend to generally appear within internal planning as little more than plot devices. Add the fact that I’m actually the only one on the team who has an interest in the Royal Navy, it becomes extremely hard to design one that we would find satisfactory.

As such, given the massive backlog of things we’d like to have illustrated, you can see why they don’t generally get much beyond the sketch stages.

Here’s an example of a character who we’ll probably … not get around to finishing. I’ve actually posted her sketch and design around a few times so a lot of you probably have seen it before. This is Pacific’s Queen Elizabeth. You can see that the date of her initial design inception is 2015. In other words, immediately after Pacific vol. 1’s Chinese release.

So, here was someone who made it past the initial rounds of discussion. Like pretty much every shipgirl creator out there, we essentially settled on a number of national traits and tropes that are associated with the English. Her physical appearance was easy enough. The person we wanted to draw serious reference to was a redhead, and as such, it made perfect sense to give her the same shade of hair color.

A queenly, steely individual would probably style her hair in the same way. So, we had to give her a hairstyle that was “sharp” or in November’s words, “scary” looking.

Back then Sune has significantly less influence over shipgirl designs than she does now (xD), and we thought something very prim-and-proper would be nice. Since she serves directly as a foil to some of our more elegant and mature shipgirls (remember, Jer wasn’t posted to the public at this stage!) it only made sense to provide her with a ballroom gown. The intent was to emphasize on the “lady” aspect.

Unfortunately, work basically fizzled out after that. We simply had no time to refine the design further since vol. 2 was immediately on the horizon. I still have a large number of fabric patterns and designs that we planned to work into her dress, and we had a lot of jewel patterns that we obtained from various sources to spiff her design up but November (bless his heart) basically lost interest around a week or so later.

Do we still use her in our storyline planning? Absolutely. First of all, someone has to actually provide security to Buckingham Palace. Secondly, we have a personality for her. She’s not really that easy to get along with mostly because she tends to be a bit distant. You know the type of person who’s very serious in demeanor? It’s not even that she’s mean. It’s just that.

Thirdly, we’ve essentially figured out her plot “arc” (she’s instrumental in the crown and the competent English folks retaking control of RN-STEC for reforms. Indirectly, she’s responsible for the English represent (Garrett Fairbanks)’s presence in the other side of the ocean. Directly, she’s actually been around for a while. If she’s around to handle Lori’s escape and the diplomatic fiasco that one caused, she’s definitely an experienced hand at politicking.) and we have a great idea about how her powers and abilities work.

However, therein lies the issue. Since we haven’t posted those specific arcs yet (it hasn’t came up in a question, and we’ve got a lot of other stuff we’re working on) you can see that she’s relegated to the bench. Some day, she’ll have a chance to introduce herself to you. I think we’d all be looking forward to that.