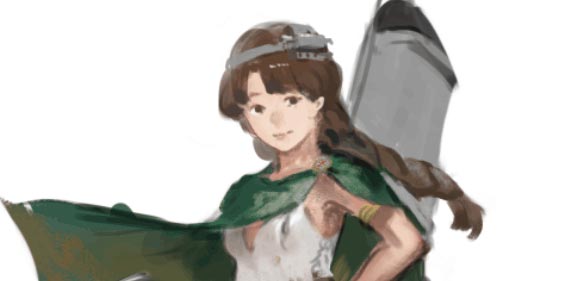 Or, I think this one should be titled “working with the “ship” in the term “shipgirl.”

First of all don’t mind me much. I’m still recovering from a nasty cold but I just wanted to write. It’s why fireside chats are fireside chats. They’re literally my extremely disorganized ramblings. Unfiltered.

Based on my observation around the community, there are varying degrees of character design in terms of the “shipness” of a particular shipgirl. At the strictest end we have straight-up anthro-moe, where physical properties of a ship literally translates into the shipgirl’s physical appearances. You see this quite a bit in some of the earlier KanColle designs – for instance, Furataka missing an eye or Shimakaze’s height corresponding to her actual length.

Again, I’m not overly fond of that. In fact, I’m of the opinion that the shipgirl’s physical properties should instead have purpose. This is basically a way of saying that for Pacific, due to our emphasis on the girl part of shipgirl, we tend to fit physical parameters or attributes only when it suits the design of the character. In other words, generally, history trumps design parameters/statistics.

A good example is our Enterprise, who is, well, a head or two shorter than her sisters.

Now, I’ve made the argument before – the Yorktowns were smaller ships in terms of displacement compared to their major competitors at the time. However, if we were going to go with that line of thought, then that would mean we lock Yorktown and Hornet also into shorter character designs. Instead, they’re both leggy beauties (not saying Prisse doesn’t have good legs – but she’s definitely a little shorter than the other two) that would look great as cover girls on swimsuit calendars –

Yeah, okay, sorry, I’m still a bit woozy under the effects of cold medication. PROBABLY shouldn’t be writing long updates or randomly rambling to our readers, but, hey, this is what I enjoy doing, so what the hell, right –

Right. Anyways. Back on topic. The reason for the trio’s design is really that we wanted to highlight Enterprise first and foremost. Artistically, the easiest way to do that is to give her something very obviously “different” to set her apart. Height is easy. It’s also thematically appropriate. If you look at how we wrote her and what her personality’s like, Enterprise is one who’s definitely not afraid of punching above her weight. In fact, throughout her historical lives – not just CV-6 – she’s been the underdog of underdogs.

So we thought making her a little smaller would not only be adorable, but it also shows that fighting spirit well. November calls it “contrast moe.” (He also just thought it’d be cute for her to lug around a big box-like piece of equipment – and so we kept the pavise design rather than the more streamlined Essex-gear that you’ll see later on in the book)

So. Okay. Then we sat down and thought about Hornet. What kind of a body shape do we want to give her? Should she be svelte or luscious? Tall or short?

Well, we looked a bit at her record. The overall record of CV-8 is basically “green.” Arguably the greatest contribution she made to the war was the Doolittle Raid. At Midway her score was quite poor, and her performance at Santa Cruz – her final battle – was mixed. The overall impression we got was that she should be someone who visibly looks a bit more “dumb blonde” than her sisters. So we made her tall (trust me – I’ve got long legs. Growing up felt awkward as hell sometimes), and intentionally posed her so there’s a degree of timidity or awkwardness in her art. She can often be “accidentally lewd” because again, that’s superimposing an aspect of her ship’s history (awkward derpness) onto Hornet the shipgirl.

Which now then leaves us with Yorktown. This far into the game, we already know what we want to do with her. She’s the quiet, somewhat homely big sister. Less famous than Enterprise, less explosive (in terms of the effect the Doolittle Raid had on public morale) and a lot more mature and at ease than either of them. Enterprise herself is pretty tryhard – if I can borrow a word from my moba days. Yorktown tries hard. Huge difference. As she describes herself in vol. 3, her entire experience has been a string of chances and missed chances. She doesn’t stress.

We gave her an “ordinary” hairstyle – some very simple braids – and an “ordinary” hair color (brown) to highlight that. You can tell what we’re trying to do with her body posture. We liked how “snappy” the old Yorktown looked, and even in the newer draft we want to make sure that she’s standing up – while still maintaining a sort of casualness in her posture.

We’ve spent a lot of time crafting this trio’s personalities and how they’d fit with each other. The three are sisters. They’re definitely close with each other. However, I would say that their sisterhood is more “intuitive” or “kinship” rather than strictly biological in nature. In Pacific, after some very large back and forth in STEC’s own classifications, shipgirls are classified based on their equipment’s identity. The biological data just doesn’t match consistently with what STEC thought it knew.

It’s also worth noting that the information given in the profiles and their introductions are all moments that are “frozen” in time. Hornet’s excitable and awkward but it doesn’t mean that she’s destined to forever remain awkward. Enterprise is a little cold right now but she’ll definitely be warming up (come on I’m not in this business to be edgy, after all. I like cute and happy (mostly)

It’s worth mentioning too that we’re still in the foundation stages for my vision of Pacific. Trust me, give me a few years and this tale will unravel by itself – in front of your eyes, no less!

Then we have other cases where the “role” in which the ship played was so striking that we had to take the design and run with it. 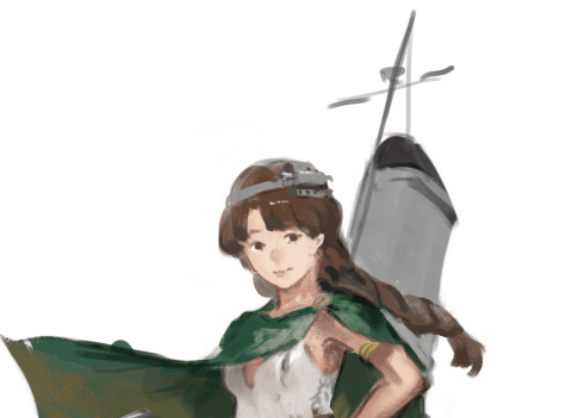 This was one that I came up with almost completely by accident. Her historical counterpart was one who meticulously recorded and witnessed pretty much every major battle as an observer. The ship’s commander wrote down not only the battle conditions, but his own thoughts and feelings. When I read through his records, I went, hell. This’ll be perfect.

She’ll be the watcher. A witness. A keeper of history and legends and a storyteller. Once I started to shape her personality around that theme, her entire design basically fell into place *snap* like that.

Then I pitched the idea to the team, and they liked it.

Then I spitballed the design at November and asked what he thinks, and he thought for a bit, and sketched one out. This design we think “works” so we’ll probably be keeping her as is. Probably’ll keep the same color scheme as she is now, too.

Well, the sun’s coming up. Guess it’s a few hours of sleep before work for me. Heh. Night everyone!