Sune here. 😀 I think before we start on this topic I should clarify some basic concepts. It seems to me that many readers use words without truly understanding what they mean.

To begin, the idea of “decisive battle.” Midway was supposed to be a Decisive Battle. However many of you seem to have the mistaken idea that the Japanese fleet simply sat around and waited for a big battle to come. This is not true. As early as 1934 Japan was already planning on a war and a victory with the United States.

No. The “decisive battle” doctrine calls for a systematic approach of attrition against the Americans. Japanese submarine doctrine plays into this, where they were supposed to pick off major American warships one by one. Land-based aircraft were supposed to do the same. Attacks carried out by destroyers lead by cruisers were another facet. The plan calls for the detachment of lighter fleet elements to attack the enemy at night preferably via surprise.

After all of this then. the capital ships would move in and deliver a strike of decapitation. Here was where the Spirit of Japan would bring the edge. The idea is that the martial spirit of Japan would triumph over her enemies just as it has countless other times in recent Japanese history.

On June 4th, Japan had every advantage. The Americans had no other capital ships in the Pacific. Nimitz had only three carrier groups. The Essex would not come for another year. Furthermore Hitler was giving the Allies a sound thrashing in Europe. America had a Germany First policy that would limit the resources possible to fight Japan with.

From the Japanese side we have known for a long time that we cannot hope to get into a war with America and make the war long. Critical action was necessary. It was imperative that we get America into a separate peace deal so we can resolve the incidents in China.

But, in June of 1942, the Japanese Empire was in an excellent position. We have Malaya, Singapore, Borneo, Java, Sumatra. We took the Philippines from the Americans. We have Thailand. We are advancing towards India. Throughout all this we only lost a few destroyers and submarines.

With such overwhelming advantage it is not hard to see why the Midway operation went through. Yamamoto needed to deliver the blow and remove the threat of the US carrier forces. Doolittle was something that the Empire remembers well and will not permit a second time. Furthermore if the American carriers were destroyed then Japanese army operations can proceed unhindered in the Pacific. A victory would buy Japan time. It was necessary.

The situation was good. The British fled the East Indian Ocean. We knew for certain that we had destroyed at least one if not two carriers at Coral Sea. The Americans had at most maybe two carriers left possibly three. Even without Zuikaku and Shokaku we had four veteran carriers. The odds were very good.

How in the world then did Japan lose this battle? Well let us consider the following.

Why did Yamamoto choose to split his fleet into four separate task forces and order such an insanely complicated battle plan?

Why did Yamamoto go to sea where he could not communicate by radio? Why did he not choose to stay on shore?

Why did no one at Headquarters contend Yamamoto’s unrealistic plan?

Who was going to take care of logistics for the invasion force?

Why were we attacking a place incapable of being supported by our land-based air forces?

Why would we intentionally place ourselves under threat of enemy land-based air forces?

Why not attack the South Pacific such as Fiji or Samoa?

Given the damage suffered at the hands of SBDs at Coral Sea, why not add more fighters and improve anti-air capabilities?

Why was Operation K (a plan to recon Pearl Harbor to confirm the presence of US carriers) cancelled?

Many analysis of the Battle of Midway focuses on the tactics of the battle. I know this post sound like NAGUMO DID NOTHING WRONG: THE POST. However it is necessary to consider many of the perspectives propagated and popularized by KanColle and ask yourself if it is true.

Tamon-maru (Yamaguchi) is often heralded as the greatest naval commander of Midway. “If only they had listened to Tamon-maru, then Midway would have been won.”

Why did Tamon-maru suggest to Nagumo to immediately launch an attack while Nagumo was deliberating over whether or not CAP and Tomonaga’s squadron needs to be recovered? Does he not know what happens to unprotected dive bombers? Did he not see how badly we annihilated the incoming American bombers and torpedo planes just moments prior to this?

Why would it be wrong for Nagumo to not want to throw away the lives his pilots on what might be a purposeless attack?

Why was the Hiryu careening towards TF 16 after the Fateful Five Minutes? Was it really a smart thing to do if you don’t know how many enemy carriers are there in the first place?

(These are carriers. Getting closer to the enemy doesn’t make an attack stronger. It increases risks of the Hiryu being found. As a matter of fact if you look up any map of the Midway battle you will find that the Hiryu took a pretty funny trip. 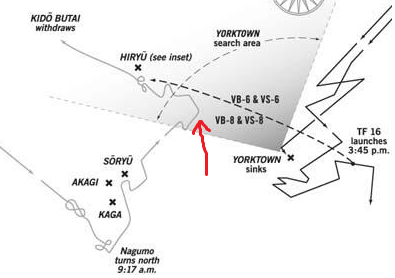 See that squiggle? That was when Hiryu finally turned around. )

Why did Tamon-maru consider the Hiryu too badly damaged by fire to salvage when Yamamoto found her the next day still afloat?

As it stands, Hiryu propulsion was largely undamaged after the Enterprise attack, and her crewmen fought to save the ship all night. The US picked up 39 additional crewmen from the Hiryu days later who never received the order to abandon ship.

The Hiryu was torpedoed at 5:10. She didn’t sink until 9:10, nearly four hours later. Even planes from Hoshou saw survivors aboard the ship. Where was Tamon-maru?

Why did he not choose to live on and pass his expertise? Japan could use veteran commanders, couldn’t she? 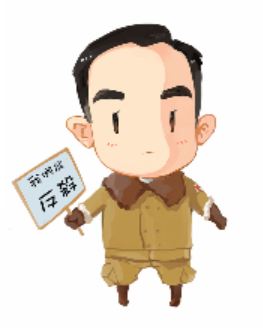 It’s easy to try to distill these historical events down to IF ONLY WE DID X, WE WOULD WIN. The truth is hardly so simple. If you examine deeply enough everyone can be attributed blame. Some are perhaps more deserving of blame than others.

Some say Midway was lost at a strategic level. That perhaps it was something we never should have gone in at. I do not disagree. But.

To me Midway was lost for a simple reason.

We might not have thought the Americans were a superior force prior to Midway but they were the better force and they proved it at Midway. The Americans fought better than the Japanese, made less mistakes, and made more correct decisions.

If they did not the Pacific War would have turned out very differently.

The men did their best.

Nagumo did his best.

The best did not deliver a victory. It was as simple as that.