“So if a submarine is sunk or is lost, would should she be labeled MIA instead of KIA?”

STEC normally knows what happens to subgirls on sortie thanks to MERLIN, so if one was to be lost, they’d know almost immediately if she was KIA and mark her as such.

No. WRONG. They do not get sunk or lost. They go on ETERNAL PATROL.

Luckily though, the subgirls on base are some of the most skilled shipgirls available. In combat, they have high autonomy – a commander doesn’t have to constantly give them orders. They know when to bug out if need be.

That girl that just yelled at you? She would much rather stay and fight.

“You’ve mentioned that the United States Navy maintains a series of floating island bases such as the Avalon mentioned in the book. My question is how big are they, and what do they do, exactly?

If it’s a research facility, I can’t imagine it being very big. If it’s something bigger, then how does the Navy keep it a secret?” 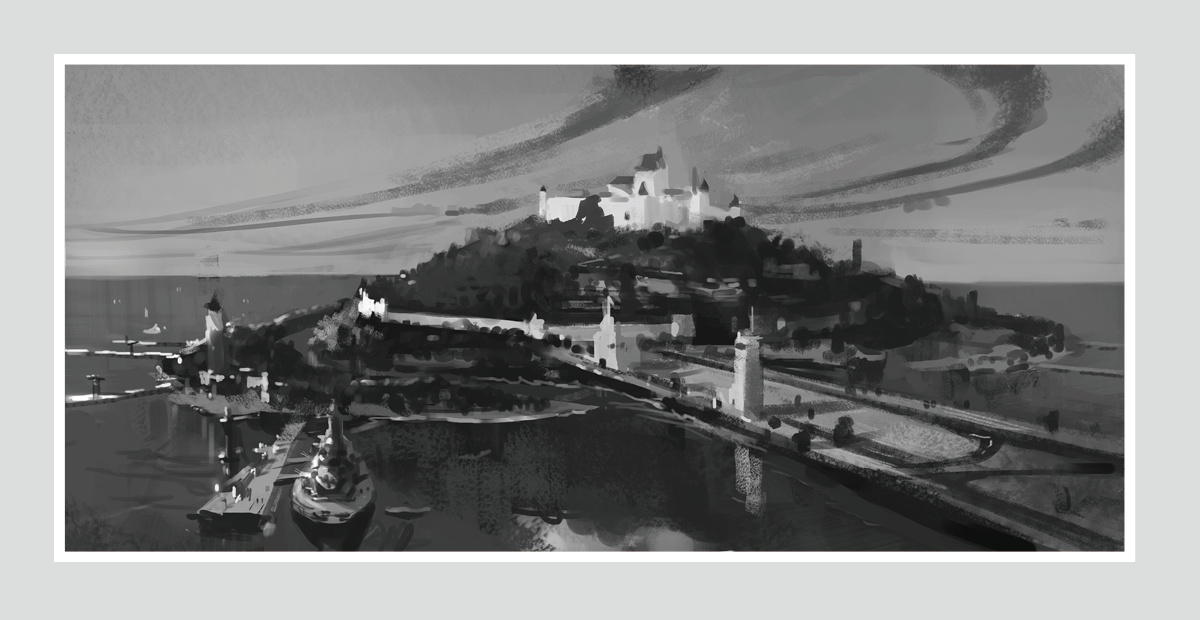 Photograph of Avalon base in Configuration R4 (Replenishment, Semi-submerged) with Main Aerial Component active in preparation for exercises.

First of all, just to be clear, the official explanation the Navy offers to the general public at large is that Avalon is a naval research facility located on an island somewhere in the Pacific. Speculation generally tends to place it somewhere maybe around California, as the official “projects” that are worked on involve areas such as metallurgy and materials. Most people that are directly involved in military research knows enough to not poke too much, and those that do, well, Avalon has fed a steady stream of new data and materials to its superiors.

In other words, Avalon is kept a secret because it’s doing a good job. In fact, it does a great job, which means a lot less attention would be drawn to it.

What about inspection, you ask? Wouldn’t the representatives touring the base know something’s up the instant they see piers meant to harbor warships or like the big air strips in the photo above?

Of course, but that’s assuming Avalon can’t choose what it wants to show. No, I’m not talking about the shields or the mist mechanism that’s discussed in OCEAN in greater detail. I’m talking about simple physics.

Those piers and air strips and walls and countless other facilities are only visible (in the conventional sense) if it’s above water, which it doesn’t have to be. The picture below is a pretty good example of the “tiered” nature of Avalon base.

Photograph of a corner of Avalon base. Note “unusual” reflection/sky glimmer indicative of active shielding/interference in place. Stress test?

Avalon is a fusion of technological development and fairy magic. Many, many hours went into its design, and it was something that was built from the ground-up as something that’s meant to build up on over time. STEC’s planners had anticipated something akin to a very long war if the Abyssals were initially beaten back, and since humanity will likely not get a respite once the Abyssals come in force, it was important that STEC takes advantage of the current peace and, of course, their fairy allies’ penchant for taking the initiative to build and create on their own.

Remember that (perhaps even more important than the shipgirls themselves) Avalon is home to countless numbers of fairies. It’s part of the reason why it requires so little staff – the fairies perform all of the functions necessary for the operation of such a base, which includes maintenance (barnacles really aren’t an issue when magic is involved), build-up (particularly munitions and spare parts for shipgirls), construction (If Mike wants a new shooting range, make the labs bigger, or a new set of simulation targets, he’ll get it. Generally within days), and “research.”

… Yeah, that last bit is a bit of a misnomer. See, fairies tend to have a single-mindedness approach to a particular idea or concept. Once an idea enters their little heads (e.g. “It’d be really nice if we could get faster flying planes” or “Wouldn’t eggs for breakfast be nice?”), they’ll try to make it happen with laser-like focus. What passes for fairy research is less the fulfillment of hypotheses and directed experimentation of theories and more of fairies literally making random stuff on a whim.

It’s already difficult enough to figure out what the fairies are thinking to begin with, since communication with the little ones are a little … challenging. It also goes without saying that not every idea that the fairies come up with is practical (as of today, there’s still a group of fairies stubbornly trying to figure out ways to make Avalon fly), but that’s the simple of life of a fairy of Pacific.

They live to create.  It excites them, it makes them happy, and they’ve got a lot of creative ways to try to make it work. It doesn’t mean that it’ll be the result STEC wants, but sometimes great things are born entirely of accidents – and in all honesty, Avalon base, actually, is one of these. But that’s a tale better saved for another time.