Our first formal update’ll be with the Silent Service series. Today’s title is actually over some questions we had over the submarine’s operating environment.

Since it’s a space we, um, operate with a lot, we thought it’s worth writing a little about. Today I’ve actually got a pair of girls to talk about this.

Though if you want to get technical about it wouldn’t you yourself be a better person to talk about this, Tautog? Historical record not withstanding, your actual record here is pretty much exemplary – 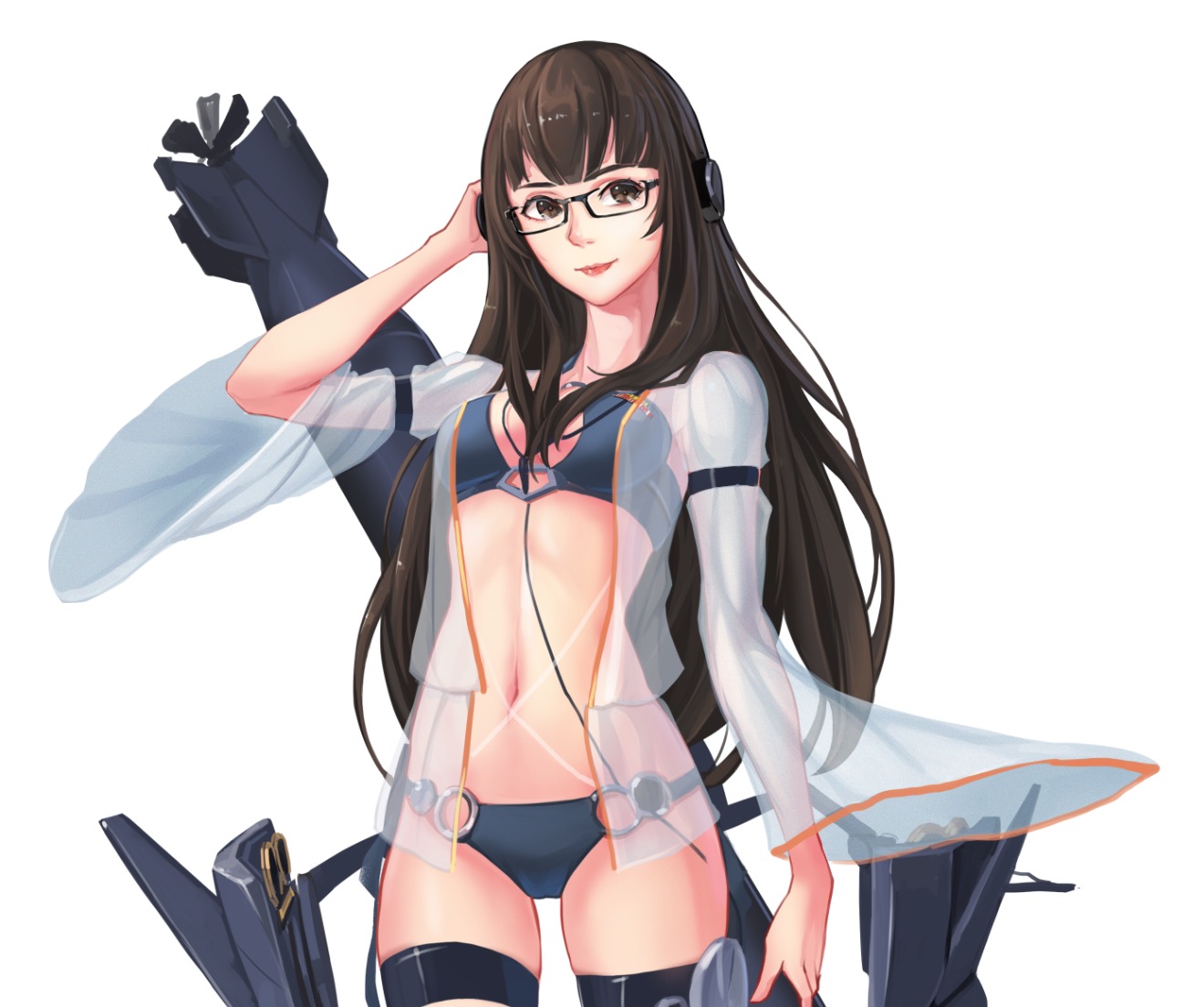 World War II submarines are a whole lotta different than modern submarines, and both are actually pretty wildly different than Abyssals. ‘Sides, I think she’s trying to get folks to “get” to know us better. ‘Suppose one good way to know that is to tell ’em what our reputation ought to be.

Right. Except Trout is nowhere the cold and calculating mistress of war PR’s trying to turn out in preparation for the war and you’re a lot, how do we wanna put it, more meme-y than Tambor.

Hey. I’m fine with whatever role they wanna assign me. If they want me to start popping out beneath beds and scaring kids I can do that too. *laughs*

So, how do you want to do this? Should we just go over what’s in the manual?

I think maybe some context is good. Most folks ain’t been under the sea. Y’know what I’m getting at?

Okay. So, water. Water is very special. Being underwater is different from being on land and in the air.

*Laughs* You’re probably thinking, way to go Captain Obvious. But, you gotta see it this way. To get anything to do with submarines in the real world or subgirls, you need to think of the underwater environment as like, something almost entirely alien to what you know.

Yeah, yeah, I know now you’re probably thinking, “doesn’t Mike integrate the surface, underwater, and aerial components of the STEC shipgirls flawlessly?” Maybe something like “it’s something the modern military already does super well, so what’s the big deal?”

That’s the thing. It is a big deal. They make it look and sound easy, but in reality, it’s anything but. So the big takeaway message today? Water is wet.

Think about what you see in the introductions of nature documentaries. On the surface, from one place to the next, you’ve got vastly different environments. Mountains aren’t valleys, swamps aren’t plains, and jungles aren’t deserts. Some lands are easy to travel through, others are downright impossible even with the aid of specialized tools. Our planet is one that is very much active on a day to day basis, and the changes that occur can be as minute as melting snow feeding into rivulets and rivers to as dramatic as something like a volcanic eruption.

The sea is the same way. It is not just “water,” and it is just complex as the thirty-some percent of the surface in which you and I reside. Just being able to perceive your environment is a huge challenge – while us shipgirls have no issues with seeing things above or below the surface (hey, remember – we are shipgirls instead of ordinary people for a reason, right? *laughs*) the vast majority of living things tend to specialize in one or the other. Water itself have a different refractive index, so an animal that is adapted to aquatic conditions have a different set of specialized ways in which their eyes focus. Think about the fisheye lens used in photography, for instance – the crystalline lenses of fish eyes tend to be very convex for the same reason.

So, in terms of actual vision, outside of “shipgirl shenanigans” and our powers, the sea is very limiting. How far can you see on a normal day? Probably on the order of a few thousand meters at least. In the water, you’d be lucky if you can see fifty to seventy meters. Unlike air, water isn’t as “clean.” There’s plenty of dissolved materials in the water itself. The slightest perturbation to the environment can throw up large clouds of detritus, which further limits vision.

So, if you can’t see very well, what’s the next best thing? Nature’s pick is sound. We often think of the sea as a serene or quiet place, but again, the reality is that it’s actually very noisy – just most of it is in a frequency we can’t hear. Sound travels further in water than in the air, making it a preferred method of communication among many species. This can be as simple as a crab “listening” for vibrations to avoid predators or as complex as the echolocation used by dolphins to find prey. It can be as ordinary as rhythmic tapping from crustaceans all the way to the noises blue whales make (which can be heard from hundreds of miles away).

Pretty much submarines do the same thing. Well, that, and things that kill submarines, be it airplanes, warships, or other submarines. ‘Suppose the best analogy I can think of would be like a bat using acoustics to find bugs. Bats are blind right, Trout? Blind as a bat, that’s actually true?

Technically a myth. But for your comparison, sure.

Yeah, there ya go. ‘Sides. I think Tau-tau’s talked about passive and active sonar before. So I’m gonna assume they know how it works.

But that’s only half the story.

Guess what? Seawater ain’t the same… seawater from sea to shining sea. Yeah. Let’s go with that. Seawater’s pretty different. We’re talking things like salinity and temperature being hugely different on a diurnal basis. Remember a sound’s basically a ray, and how it travels, as well as how your sensor’s gonna pick it up, matters. I’ll give you an example.

Places, places. Let’s pick somewhere nice and sunny and warm. Off the Hawaiian coast. That water your sub is hiding in that’s been heated up by the morning sun? The warm water bends the sound rays prematurely, because sound travels faster in warmer waters (it refracts “upwards.”) The colder waters below that warm layer? Sound’ll refract, and bend it away from the area, but it’ll do it much more slowly. The National Academy of Science had a nice article which I’ve clipped a picture from. Ta-da. 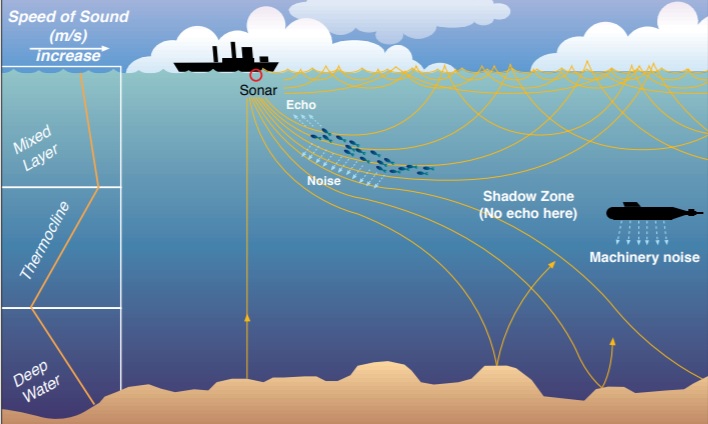 Smart submariners quickly figured out that yes, that area where the sound is mostly refracted away? That’s a good place to hide, because it decreases the effectiveness of enemy sonar. Where this area happens to be, though, is gonna vary heavily depending on geography, and a good submariner’ll always be playing the terrain to their submarine’s advantage.

In fact, the more you spend time here, the more you realize, every aspect of the sea can be exploited. Rough seas can create air bubbles and cloak the surface acoustically. Waves can produce gradients of waves that cause scattering and reverberations, disrupting attempts to detect submarines. Different properties of seawater – slight differences in acidity between the Pacific and Atlantic Oceans, for instance – can cause different levels of signal attenuation due to the loss of energy.

Being below the sea is complicated business, like we said. If you’re above the surface, you need to take these things into account if you’re gonna successfully bag a submarine. Dropping sensors and getting readings take time, and all this time the enemy submarine is moving as well.

If you’re on the submarine side, of course, there’s other challenges as well. You have much better access to acoustic information, but you’re also, for lack of a better term, navigating “blind.” There’s nothing that could help you plot a course visually. A lot of times what submarines have to work with are with special charts that detail oceanic configurations, some of which haven’t been updated in years.

And in case you’re wondering, yeah. Plenty of accidents happen. Look up underwater collision or grounding to get an idea – some submarines literally rammed into mountains.

What, ya think us subgirls just go around in the bottom of the ocean just for fun? I bet you think the Abyssals are doing the same thing just for the funnies too, yeah?

Now, onto the segment I know all of you care about.

Yup. You know I’ve got my standard fairy-issued stars-and-spangled bikini just like all the rest of our girls, but I’m pretty partial to my own looks. Especially since I think this is my first appearance, right? 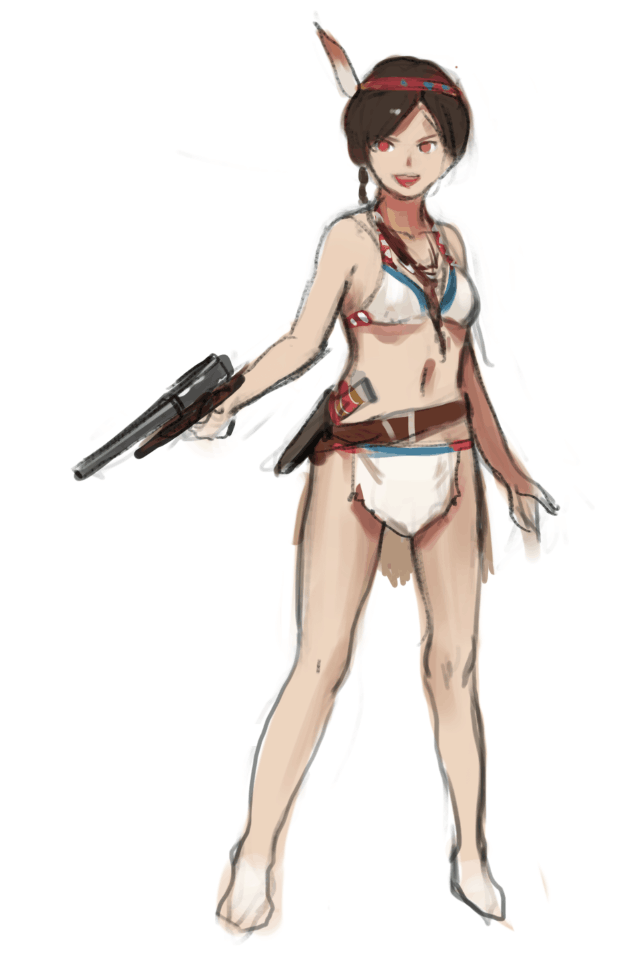 We can save the girl-talk and the sexy-girl-talk for some other update, though. Mike wanted a quick summary of the differences between subgirls and submarines on this topic, so here I am, thinking of some differences.

Right off the bat, I’m just gonna say, we’re not nearly as limited as regular submarines. Dive depth of real submarines are classified secrets, but I bet you most don’t go below several hundred feet. Us subgirls on the other hand can just swim to the bottom of the ocean if we so choose. It makes sense, right? The dual-purpose (or whatever the hell we’re calling the Abyssals that operate on the surface and below) Abyssals don’t have such qualms, so I don’t see why we would neither.

Right. We can see underwater too. That’s a pretty big help. Helps with navigation, helps with fighting. I think some girls haven’t figured out how to do it yet, but I’m pretty sure they can. Just gotta give it time.

Uuh, what else. I think a good number of us now can intuitively “process” information related to our environment. I think this is something you can teach all shipgirls (and part of Mike’s job is to unlock our potentials, heh), but like, the best way to describe this would be like.

Say using the above example involving the shadow zone. Your regular submarine captain needs to ask his crew for the information, relay it to him, process and understand it, and then act on it. Then the submarine moves.

For us subgirls? It’s like, instant. I just get it. This is what I gotta do. When you’re asking the fairies to do something? Yeah. This is what they do too. The pace is way quicker, which, if ya think about it? We need it against the Abyssals.

Now, the last thing I can think of is a recent thing, which is our access to information. Generally, much like real life submariners, our access to the comms network is a lot more limited than if we were operating on the surface. Mike’s got some of the R&D guys working on this to bridge the gap, and right now, if I sortie with a specific configuration of equipment, I actually can get more or less the same up-to-date situational reports like the girls up there. It’s just not very manageable right now and eats up a lot of storage space I could be using to store things that help me kill stuff faster or kill stuff better.

Pretty nifty, right? Man, I can’t imagine there was a time where like, the commander actually sat around and twiddled his thumbs waiting for us to return from a sortie to tell him what happened. If that was me in the big chair, I’d be worried sick every day praying for my girls to come home safely.