Success!! I think we deserve a huge pat on the back as the reviews and numbers are coming in. By the way you look totally 100% attractive in that outfit we should like, make it.

Also I got this next great idea. You know how like, the dolls on the market are all pretty monotonous? What if we made these small and cute, and then give them like, interchangeable expressions and accessories rather than a bajillion cheaply made dresses?

Think about it!! This could be a great career post-war! 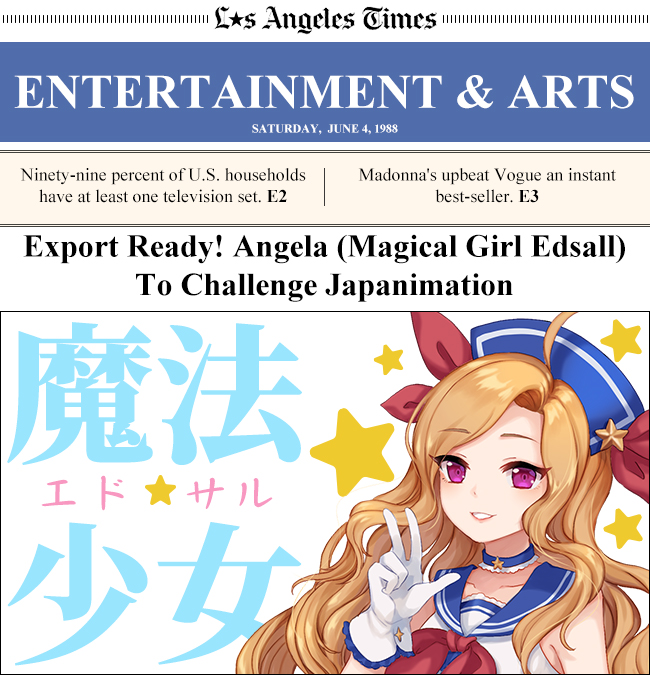 Los Angeles – It is no secret that Japanimation, or anime, as it is commonly known by its viewers, currently enjoy significant popularity in the United States today. With works such as Star Battleship Oyashima (1985, 11%), Mobile Warrior Gunwall: 0097 (1987, 13%) or the smash-hit Pretty Soldier Sailor Moon (the first animated work of any kind to reach a staggering 14% viewership nationally) earlier in the year taking the nation by storm, it would seem that domestic media productions will surely take a beating at the ratings.

This has certainly been true insofar as 1987, with Hasbro’s AniMaTron studios formally shutting its doors, Disney announcing a cut of more than four hundred staff members, and Hanna-Barbera’s latest series, Scooby-Doo and the Mysteries of the Peanut Butter Sandwich scoring a dismal 2% during prime-time. In an op-ed contributed to the New York Times last month, Minister Todai of Japan’s Ministry of Culture have dismissively said that we have lost our touch.

Japanimation’s popularity is generally attributed to several factors. The production quality is typically excellent, with particular care to special effects and the visual experience. The script-writing also tend to be superior to numerous American studios (see this editor’s earlier op-ed on why the Scripter’s Guild need to be cut off from Federal support) given the cut-throat nature of Japanese domestic competition. Unlike domestic productions, Japanimation often have a broader range of viewers. Mobile Warrior Gunwall, for instance, does not hesitate to raise the matter of war and morality in war. Though some of its viewpoints are highly questionable coming from this patriotic American’s perspective, jingoistic – or even militant, by some interpretations – works are well-received by both its native audience as well as innocent and naive Americans seeking thrills in their television programs.

Which is why we were all surprised by the unexpected, unannounced, and utterly fantastic arrival of Angela (1988). Like the titular character, Angela appeared out of nowhere, only to instantly capture the hearts of millions young and old with her distinctively American charm. Readers unfamiliar with the show may have seen at least one of the cinematic-quality TV commercials that sporadically appeared on several major networks. Yes. It’s that show, the one with the pretty young lady with her magical-looking wand.

At its core Angela is no different than any popular speculative fiction series; heroic protagonist with band of friends taking on supernatural, otherworldly threats. What sets it apart is how remarkably complex and elaborate the character and storyline is. Angela Edsall moves and talks on the big screen with an unassuming humility and grace characteristic of that girl next door you and I know all too well (or wish we knew). There’s no random antics, failing grades, or other excessively comic elements commonly found here either; the show might take itself not particularly seriously, but every matter and every arc so far is introduced with obvious and deliberate intent. Villains and conflicts are introduced with bombast but a degree of realism rare even in print media. They don’t mill about like ants or wait for the heroes to finish speaking. For that matter, the show is a visceral experience of what humanity is, full of love and hatred and laughter and tears that makes the characters relatable to our own daily lives.

What’s more, everything in this show is crafted with painstakingly American dedication – this editor has so far watched twenty-two episodes released to the Times as part of our advanced review and could not find a single instance of repeated stock footage use. That’s dedication. The masterful application of its animation is simply beyond compare, and its combat scenes – easily the highlight of each episode – smells of sound infantry tactics only a veteran of the US armed forces would know.

All this was accomplished by a studio that was registered only four years ago, with no other production to their name. Yet their hard work and dedication clearly paid off, with Angela‘s pilot episode (An ordinary girl in white) scoring a thunderous 17.7% on release, breaking the Japanimation darling’s record within the very year it was introduced.

The Japanese television giant TV Asahi, always on the vanguard for interesting foreign shows (It currently holds exclusive broadcasting rights to the WWF and several prominent American television drama series such as Companions and Star Journey) has already purchased broadcasting rights. Angela will visit the homes of millions of curious Japanese viewers under the localized name Magical Girl Edsall.

For viewers looking for a wholesome adventure into the fantastic, Angela represents an excellent foray into the genre. Be prepared to be disappointed, however, for one reason: its production quality is beyond compare, and easily outstrips its contemporaries technologically by a wide margin (one of the board’s professional contacts, speaking on condition of anonymity, expressed incredulity at its production quality being decades ahead of everything else).

Still, we Americans should count ourselves blessed that ingenuity – that central ethical tenet of our nation – has given us yet another great work. Minister Todai, if you have not had a chance to watch it yet, please give it a look and inform us of your opinion.

You can tell that a sizable portion of our Chinese side of the team – such as Zero and St. Bernard – really like magical girl type of designs. So when we did this piece, we ended up looking into several major design components, though the biggest is probably music-related. Basically, think color guard/marching band type uniforms. If you’ve been in high school here in the US, the band geeks are a pretty sizable population which you’ll probably have came across at some point. The flag and gun and saber twirlers. Cheerleaders minus the football. You get the idea.

I should note that the color guard we see at marching bands are NOT the same as the color guard in a military context. This is strictly a performer thing, but it’s the first point of contact St. Bernard went for when designing Edsall’s costume.

Since Edsall is definitely more of a “feminine” character than some of the more tomboyish girls, her costume has a lot of ribbons and other frilly, girly things. I imagine that you might see like, stripes and pauldrons and Napoleonic type uniforms on someone like Maury who’d look pretty good in that sort of setup, but for Edsall it’s ribbons and skirts all the way.

For comparison purposes, here’s a photo taken by the U.S. Navy itself during the pre-war days. You can see that style doesn’t change (much). 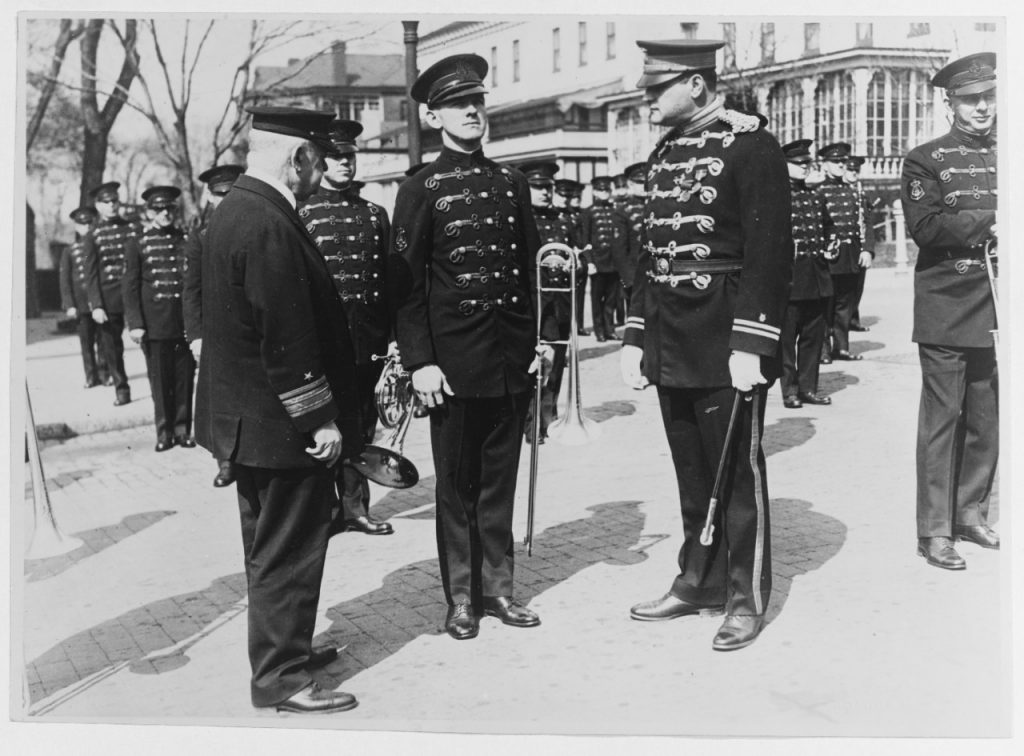 As for the overall tone of the piece, it’s a nod to our own history. Fear of Japan (or, rather, Japanese economic dominance) was significant in the 70s and 80s due to Japanese work ethics as well as quality and competitiveness of goods such as automobiles, household appliances, and tech. Talk to people in that time period and you can see there’s definitely that fear that we’d all be working for the Japanese some day. In a way, it’s not unlike the fear of China today.

There’s also a bit of a fixation of “Americanism” that I played around with. Ostensibly the article is about an American animation series getting ready for Japanese export, but you can see the (fictitious) author spent a lot of time praising the show itself. Again, this seems to be a reoccurring theme for me when I was digging through newspaper archives of the 70s and 80s (which is what this is modeled on). Honestly, it doesn’t read that differently from some of the Soviet newspapers (laughs).

In the Pacific timeline, Japan’s fixation on Fukoku kyōhei does not necessarily mean neglecting the arts itself. What’s more, considering the nationalized nature of many of Japan’s industries, it’s certain that Japan’s leaders can see the benefit of the additional economic gains for Japan as a whole.

(Or, in the words of Sune, “if Japan financed battleships selling literal cans of beef, hard to see why you can’t secretly fund a war machine via anime and waifus.”)

Curious readers may also notice that the allusions to a particularly interesting Japanese series here is “uncensored” – that is to say, it’s not something like Sky Blazers or Power Rangers. As always, there’s reasons for this. I’m looking forward to elaborate a bit more on the cultural aspect of Pacific’s America in the coming days.

Oh. Of course. You want cute girls. Here you go.