Hi everyone! Tautog here again. I’m actually, technically, um, not a part of the Navy Foods book. But, well, Pacific’s about shipgirls and shipgirls doing usually cute things and America and –

Yawn Yeah you can tell I just got out of bed. Blurgh! Focus, Tautog, focus!

Okay. So, as we work on organization and translation and all that fun stuff, we also want to write about new stuff. As I’ve said before, Morgane’s Navy Food articles have been written on and off pretty much since Pacific’s started. It’s mostly historical and contextual – we thought about maybe attaching a particular shipgirl to each recipe, but then thought it’d be kind of gimmicky.

Not to mention, it would force people into stereotypes. Take today’s article for instance. A shipgirl with her roots in the New England area would be familiar with the thing we’re talking about. Whether or not she likes it might be another story.

Same thing with the Navy. Historically, not every recipe is well-received. Some, in fact, are polarizing. Cod happens to be one of these. Let’s take a look. 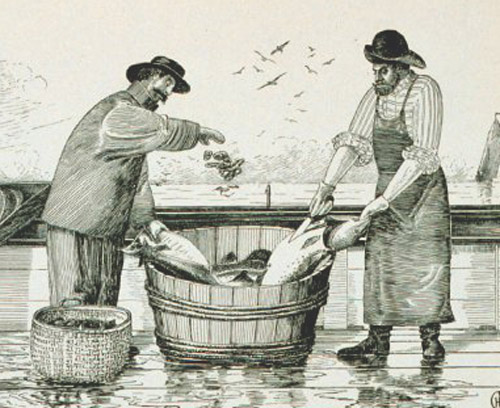 Basically, cod was a very common food fished all the way back in the days of America’s colonial days. As you can imagine, we even have places named after the fish (Cape Cod). Because the fish was relatively hardy and not too difficult to catch, salted cod became a very common food – some would say staple – of households in the area.

You see the words “salted” and you think, aha, the military would like this stuff! You would be correct. Salted cod has been a staple in the various navies around the world, though it was definitely not preferred – sailors very much liked beef or pork when they can get it!

For the US Navy, though, in World War II, this particular recipe was a really good way to use up canned fish. The USS Pampanito website is really cool and you guys should definitely go visit, but basically, salted cod would come in these cans about that size. (It’s also from the Pampanito website) 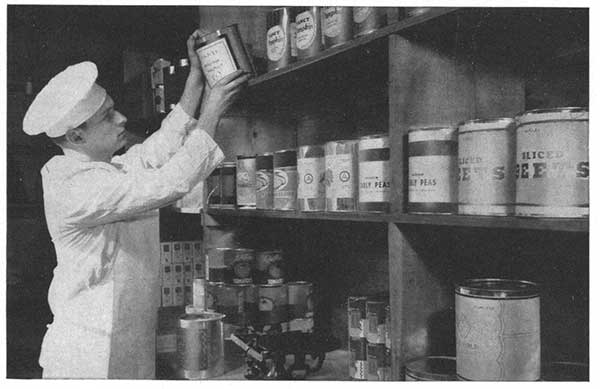 About a cup and a half of melted butter or oil

and some salt to taste.

This recipe is really simple. Mix up all the ingredients up there. Grab a spoon or ice cream cup, form into balls, and fry in oil in high heat for about two minutes. Once they’re golden brown, take them out. Some people add crumbs or other stickies on the surface to add some crunch, but the original version works just fine in my opinion.

For a slightly fancier version (if you want better texture), try this one.

Get some fresh cod from the market. About a filet or two would be good per person – pick the big ones. For every filet you use, use about twice as much potatoes. So if you’re using a pound of fish use two pounds of potatoes.

You’re also going to want butter, cream or whole milk (about a cup or so is good! Less is fine too), salt and pepper, and about two eggs per mixture as above.

So, what you do is that you wash your cod very well, and then you peel the potatoes. Cut up the potato and cod into thick slices, and boil them in a pot using a lot of cold water. Keep on boiling until the potatoes are soft and completely cooked. If you want to save time, beat the eggs until they’re very well beaten during this time.

(I actually don’t thaw the fish – I find it easier to hack the cod into pieces while frozen anyways, and you want a bit of fishyness in this particular dish anyways!)

Drain the water. If you have a potato masher use that to smash up the potato-fish mixture really well. If you don’t I find a rolling pin works fine too (the normal stick ones, not the fancy French or whatever ones! I mean, my rolling pin is LITERALLY a stick!). If you don’t use rolling pins for whatever reason I guess just punch the mixture with your hands after it cools down.

Right around then, to the fish-potato mixture, add as much butter as you’d stomach (so basically a stick or about an egg’s size is good), the beaten egg, the milk, and the salt and pepper. Get your hands dirty and make balls or whatever shapes you’d like out of the mixture.

Then, fry them like you would. What I do to save oil is that I make flat cakes out of them. They cook faster that way too.

Yeah, well, not everyone had access to that many eggs like historical aircraft carriers! Most of the other ships had to deal with the powdered stuff, and I can think of like, ten things to use with fresh eggs that’s better than glorified mayonnaise.