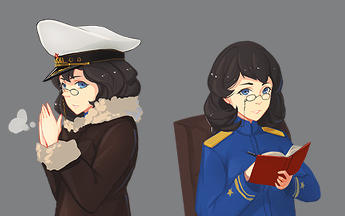 A serious question about shipgirls being girls.

If they are girls then what is the relevance to the ship?

I am working on a shipgirl of my own since my grand father was a dock worker in Brest during the war. However I do not know how to design her because it seems to me that all she did was to leave France behind during the war. She sank no ships that I know of and I do not know any cool stories like what you do with “the Big E” or other American ships.

The only thing that is important is that she has the name of a very famous French heroine. You may not have heard of her, but in France we consider “La Pucelle,” or Jeanne d’Arc, a national hero. She is best known for driving out the English and restoring sovereignty to the French people. You should look her up sometimes.

However the Jeanne d’Arc ship did nothing like the sort. How should I becoming inspired?

(Response also translated into English; original French can be found in my inbox)

First of all, thank you. I do know who Joan of Arc is.  Mère de la nation française and all 😉

Secondly, that’s an interesting thought. I think it honestly depends on which direction you want to take your girl’s design to. Pacific has a much larger storyline and an overall plot “direction,” so it’s only natural that we focus on the individual aspect of each character.

We have a lot of characters whose historical counterparts might not have been exceptionally “heroic” like Enterprise. However, I think you should get into the spirit of things first.

You say it’s connected to your grandfather, right? Well, is he still here? You should talk to him as much as you can to get an idea for what he felt at the time. Use those emotions as a starting point. If you want and you think it fits the character, ask him about the ship itself. It turns out that ships have temperaments, too. Ask the old buccaneer in my house and he’ll tell you that his girl was FEISTY as hell. She would only play nice if you play nice with her. You try to get too rough with her and she’ll flip you right off – and she was an aircraft carrier.

For that particular character (which you’ll all meet very soon) the personality just shone through. Everything from her CO to her crew to her battle record screams a fiercely independent spirit. She doesn’t walk; she strut and preen. She doesn’t just stand out; she captivates and enchants. This was a warship who is, in every sense of the word, larger-than-life. Impetuous. Invincible. A class unto her own.

“Hell yeah she’s gonna show off that bod. You know it! HOOYAH!”

…I guess what I’m trying to say is that you have to find something you love about that ship. Jeanne herself offers plenty of inspirations. Maybe you can take a chapter out of her life. Someone who answered God’s call to save her country. Maybe you can take a bit out of her experience. After all, you wouldn’t expect an old cruiser to singlehandedly turn the tide, but you didn’t expect a young illerate peasant girl to rally the French either. OF course, if you’re gonna look for parallels, you should first and foremost think about why you want to make that shipgirl to begin with.

Is it just because of waifu reasons? If so, how much work do you need to put in, really? Why not pick something that you find aesthetically pleasing?

Is it for historical reasons? Well, see above. It’s your call to communicate to us readers what you want us to learn. Maybe take a chapter out of KC’s dev’s book. “I want you to meet this glorious warship of our past but as a cute girl instead.”*

Is it out of something personal? Like, perhaps fulfilling a request from family, or out of the desire to create something to immortalize a moment?

*I should note (I’ve said it before, but I’ll say it again) that this is basically the exact OPPOSITE of what we do here. We incorporate a ship’s history in a more subtle fashion. It frees the character, and she is able to communicate to us information without being “tied down” or “shoehorned” into the same traits or designs. There’s plenty of chances to learn about the actual history, after all.

A-am I back at work yet?

Guuuh. I feel antsy if I’m taking time off… I know like, nobody actually pays attention to me or anything but I still like to think people read my sub corners…

Oh. Of course. I mean, technically you’re the site admin. I’m just the creator that pop in once in a while. We can get back to the regularly maintained subcorners whenever you’d like.