Thanks for the responses from both our regulars and our readers. Zero’ll probably turn those things into something entertaining. Just watch.

Now, on our regular end. We’ve pumped out a bit more of the web layouts. You can see, for instance, that Zero’s trying to basically put buttons and whatnots on the site. We’re trying to learn to integrate discord and social media and forums and everything else – so please bear with us.

Yeah, despite all of us being something like 20-somethings (mostly early to mid), many of us really didn’t grow up using social media or these newer apps. I suppose you can say we’re a little old fashioned, after all. 🙂

Another update has been added to navy foods, but it’s in mandarin. We do have a Japanese translation in the works, but it’s really more so for the Chinese folks than us. They find our food fascinating (and I think we largely them as well).

The English source is the US navy cookbook. I have it in physical copy, and there used to be a copy of it floating online. I believe the Pacific War Encyclopedia (or something similar to it) also have it in text form as well. If you’re interested, go check it out.

Lastly, this is a question we actually got a while back with Lori, but given our new Silent Service book, it’s pertinent to raise it up again.

Generally speaking, it’s some kind of variant of “how will U-boats get treated in Pacific” or “Will Pacific bring in any U-boat girls?”

The answer to that now is that we now see an opportunity bringing in a character directly capable of interacting (both thematically and “historically”) with a large number of the cast. So, unlike the American(ized) Lori, she’ll be a lot more German.

The first question is a little harder to answer. I’m the author of Pacific. Sune jokingly calls this book “Allied Historical Revisionism” due to how stars-and-stripes and apple pie it gets sometimes. The reason here is that I believe it is important to highlight the accomplishments of the US during this war. There are many things that we did great in, and many things we didn’t do so well, but you do not get nearly the amount of wank on the Allied side as we see on the Axis end – whether it’s the Germans or the newly arisen Kantai Erection or Neo-IJN weebs that seem to populate this particular fandom.

Make no mistake. I am not saying that the Japanese or the Germans were trash. Quite the opposite. A careful study of many perspectives and many sources left us capable of making our own connections, and we believe in telling things for what they are. Japan, for instance, is stunningly competent in some of their pre-war and early war doctrines. Their training system was excellent, their technology was in many aspects top of the world, and their commanding officers had a gift and in many cases an intuitive grasp on tactics if not overall strategy. They were a competent enemy. To say anything otherwise would not only be insulting them, but also all those on our side who gave their lives in World War 2.

This does not mean that they did other things well. In fact, I believe you can appreciate the (oftentimes critical flaws) of the Japanese or the Germans once you get a better understanding of their strengths. It is my opinion that at the end of the day, these countries were not defeated only by matters of an environmental or industrial concern. I (and I speak only for myself and not the team) think that the failures of people, particularly the ones who are responsible for the lives of others, played just as great if not a greater one in the shaping of history.

Longtime readers of Pacific will know that indeed, that was what drew me to something like Pacific to begin with. I am fascinated by the machines of war, but what has always interested me were the people crewing the machines and the people giving orders to the machines.

Thus, it is honestly from this angle that I got together with the team to talk, okay, how are we going to bring a U-boat girl in? What does this carry for the implications of our lore? How would she view Nazi Germany? The War? What is she doing now? Why is she even here?

For that matter, how are we going to communicate the nature of the U-boat force during WW2? Whose memoirs do we use? Which sources do we apply? How do we feel about the matter, and how clearly can we articulate those opinions?

Keep an eye out and we’ll answer all of those. Believe me, we’ve got it coming up, and it’ll be great. 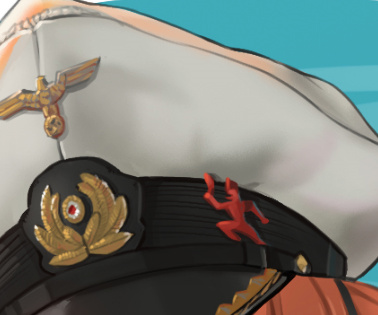