“Are the girls appearing in 2016 canon as far as Pacific is concerned?”

I really, really feel like I’ve answered this before. In one word: yes.

You may be seeing a New York with a rose in her hand floating around. Trust me, November’s having plenty of fun with the portraits. Here’s actually a sketch version of the New York piece he showed everyone today. We ultimately decided to scrap this one because it made her look a bit too “evil.” 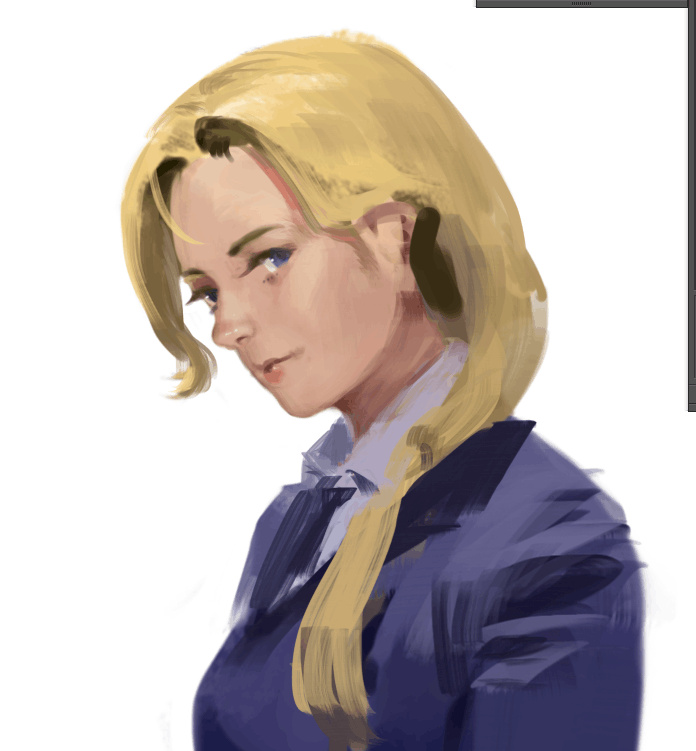 As November said, there’s a particular challenge associated with drawing shipgirls. We do want the picture themselves to instantly convey something about the girl that we’d like you to know. For instant, Sima’s Hakuryuu in all of her iterations is really a nice but (klutzy) girl. So we wanted to draw her with a fairly innocent expression, but at the same time, really derpish. For a more recent example, Pam, we wanted to give her a nonchalant look, since she’s laid back and relaxed. You can’t be a lifeguard if you’re tense, after all. Not good for swimming. 🙂

For New York, as I’ve mentioned before, she’s supposed to be a sharp, very capable individual. As we’ve mentioned, she does work in legal, so we wanted to give her a bit of a sly or at the very least “calculating” appearance. Let’s just say a lot of Ace Attorney music was playing while we were bouncing around ideas for how her personality would work.

The ship itself easily fit the bill of a stereotypical New Yorker, too – whether it’s her acing her gunnery competitions in her prime (during WW1, no less!) or that she managed to rush herself out the door within months during a refit after Pearl Harbor. Here, we kept her appearance simple, though. A capable woman doesn’t need to wear heavy make-up to be intimating or powerful, and the goal here is really to make her look like she could look equally at home in Albany or NYC.

Why not short hair? We had a few drafts with her having short hair, but we felt that a tied ponytail just worked better with the personality. Traditionally, short hair is associated with masculinity. That’s not what we want to do with her.

”Why is New York the only shipgirl wearing pants in Pacific?”

Here, let me answer this another way. There is nothing preventing any of our shipgirls from putting on (or taking off) more clothes. In New York’s case she really likes pants. She’s the type who would rather choose a tux over a cocktail dress,m so Chester or one of our usual trolls raiding her closet will probably find 3 or 4 suits for every dress she keeps in there.

Probably a lot of well-ironed dress shirts in there too. Color-coded, coordinated, meticulously organized. Yes, plenty of skirts to go with those. She’s not all pantsuit, you know. 😉

Asking her why and she’ll probably just give a shrug and stare at you. Why is it any of your business in terms of what she chooses to wear?